Last season saw the whalers sink further into debt as they continue to operate solely on massive government subsidies, including some 30 million U.S. dollars from the Japanese Tsunami Relief Fund.

The reality is that the Japanese whaling fleet is in a poor state of operations. The factory ship Nisshin Maru is in need of extensive and expensive repairs. In order to return to the Southern Ocean, the whalers will need another huge subsidy from the government.

It is for this reason that Japan has taken extreme measures to halt the effective work of Captain Paul Watson and Sea Shepherd through fabricated allegations. The position of the whalers is that if they can remove Captain Watson they will be able to shut down Sea Shepherd operations.

However the Sea Shepherd fleet is now stronger than ever, with four anti-whaling vessels ready to intervene with the illegal Japanese whalers in December with Operation Zero Tolerance.

Captain Peter Hammarstedt had this to say about Operation Zero Tolerance, “Our objective is to bring the whaling kills down to zero this season and we are now in a position to do so. We believe that if we can achieve zero kills we can evict the whalers from the Southern Ocean Whale Sanctuary.” 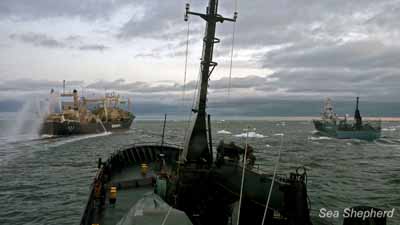 The Bob Barker moves into position behind the factory whaling ship,
Nisshin Maru, to block the transfer of whales from the harpoon ship
Photo: Sam Sielen/Sea Shepherd 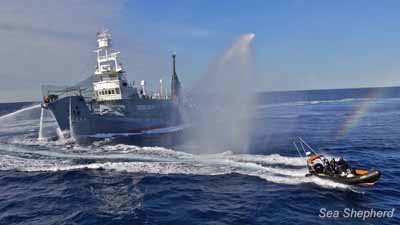