Japanese Police Are Getting Desperate in Taiji

The arrest seemed pre-planned. No witnesses saw Erwin shove the employee and Erwin was not even questioned. The police simply approached him and took him away. Out of compassion for the dolphins being slaughtered in Taiji, Erwin Vermeulen travelled to Japan at his own expense to devote his time and energy to the Cove Guardian mission.

The Cove Guardians are now half way through their 2nd year in Taiji. Operation Infinite Patience is clearly wearing down the nerves of the Japanese fishermen, local politicians, and the police.

Operating inside Japan requires a completely different approach, and patience is the key to success.  The Cove Guardian mission is to be ever present, recording every activity, and constantly on vigil in the face of the dolphin killers, day in and day out, for as long as dolphins are being killed. All Cove Guardians are cautioned that every move must be nonviolent and within the boundaries of Japanese law. 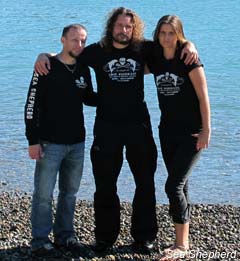 l to r: Cove Guardians Bob Timmons,
Erwin Vermeulen, and Nicole McLachlanLast year, the Cove Guardians were present in the killing cove for six months, cutting the number of dolphin kills in half, and this year they have been on vigil since September 1st. Many dolphins have been saved.

The key to the success of this mission is in not handing the authorities any excuse to expel the Cove Guardians. For that reason, every precaution is taken to avoid breaking any laws. Erwin Vermeulen did not break any laws. He was conveniently accused of doing so. Which law, we do not know, because the Japanese police refuse to divulge that information.

All we know is that Erwin was trying to take photographs of the dolphins when he was approached by police, handcuffed, and taken to the Wakayama Prefecture police station, where he has not been seen or heard from since.

Earlier this year, when Cove Guardian Rosie Kunneke was assaulted by a Taiji fisherman, her assailant was questioned and immediately released. This clearly indicates a double standard at work, with the law being applied discriminately and unfairly against the defenders of the dolphins.

Tensions are building and it appears that the police are testing the waters. They want to see what the reaction of the international public will be before making their next move.

The police have a dilemma. How do they get rid of non-violent dolphin defenders who have not broken any laws, but are clearly disrupting the horrific, cruel slaughtering practices of the Taiji fishermen?

Arresting Erwin may be the first move in a new strategy to deter the Cove Guardians by accusing them of false offences.

The Cove Guardians will not be deterred.