Both men were happy to be reunited with their shipmates and eager to return to chasing the Japanese whaling fleet in the Southern Oceans. Both men reported that although they were roughed up when they first boarded the whaling ship, that they were treated well during their time onboard. The only injury was a bruised wrist suffered by Giles Lane.

"It did not take long before the whalers realized that they made a huge public relations mistake in keeping us on their ship," said Benjamin Potts. "We made it clear to them that Sea Shepherd was committed to stopping their illegal whaling activities."

"Although we appreciate the concern that people have expressed for our welfare, it is important to remember that this is not about us." said Giles Lane. "It's about stopping this cruel and illegal whale hunt. The treatment that we received was trivial in comparison to the suffering that the whales experience at the hands of the Japanese whalers. They may have been rough with us but at least we were not harpooned, electrocuted and mutilated. This is not about us, it's about the whales."

The Steve Irwin is continuing its pursuit of the Japanese whaling fleet. "This is the 8th day that whales have not been killed," said Captain Paul Watson. "Every day that we stop the whalers is a victory. We will continue to intervene, harass, block, and obstruct the whalers at every opportunity."

The Steve Irwin is presently at 59 Degrees 46 Minutes South and 85 Degrees 59 Minutes   East and on the tail of the Japanese whaling fleet.

The Australian court has ruled that the Japanese whaling fleet cannot kill whales in  Australian Antarctic Territorial waters. The Sea Shepherd Conservation Society is prepared to work with the Australian government to uphold the court's ruling to ban the Japanese fleet from Australian waters.

"After our 48 hours of captivity, I'm pleased to have rejoined the captain and crew of the Steve Irwin.  I am unharmed and ready to continue disrupting the whaling of the Japanese fleet in the Southern Ocean.  It was worth the risk and time in order to inform them of their illegal activities and stop them killing whales whilst we were aboard."

"I'm happy to be back aboard the Steve Irwin with my crew.  I'm pleased that everything worked out and that no-one was hurt, and also that we were successful in placing the world's attention on the illegal slaughter of whales in a whale sanctuary in the Australian Antarctic Territory.  To the Japanese people, we have nothing against you as a people.  I enjoy Japanese culture, but your barbaric slaughter of intelligent and endangered marine mammals must stop before you drive them to extinction." 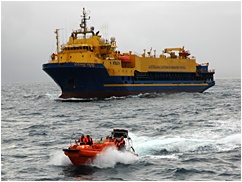 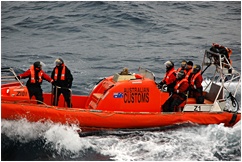 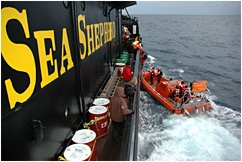