The Japanese Pirate whaling fleet is set to depart from Japan this week on a mission to defy international law and international public opinion. 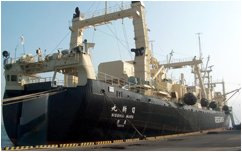 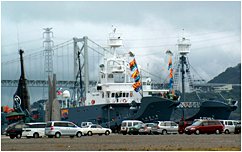 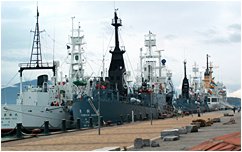 The Japanese whaling fleet in Shimoseki,
making preparations to depart for Antarctica.

The 2006/2007 whaling season in the Antarctic Whale Sanctuary is poised to be the most confrontational and volatile anti-whaling campaign to date.

Sea Shepherd Conservation Society has been planning and preparing this campaign since our last return from Antarctica in early 2006. Our objective is not to document or protest Japanese activities. Our objective is to directly intervene against their illegal activities.

Japanese whaling activity in Antarctica is blatantly illegal. It is a violation of the International Whaling Commission global moratorium on whaling. It is illegal to target endangered fin and humpback whales. It is illegal to kill whales in the Australian Antarctic Territory.

Sea Shepherd volunteers are prepared to enforce the law against the criminal whaling activities of the Japanese whaling fleet.

The eyes of the world will be focused on the harsh and lonely waters along the Antarctic coast in December and January. It will be a classic battle of wits and daring as those who champion life for the whales engage the forces of cruelty, destruction, death, and criminality. It will be a showdown between life and death, good and evil, greed and compassion. 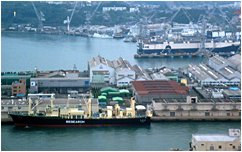 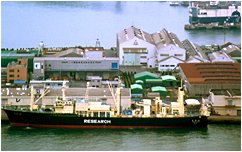 "Our objective is to place ourselves in harm's way to protect these gentle, intelligent, and socially complex sentient beings," said Founder and President of Sea Shepherd Captain Paul Watson. "I have a courageous crew willing to sacrifice their holidays away from their families and willing to risk their lives in one of the most hostile regions on this planet against one of the most ruthless adversaries on this planet."

"We're ready," said Engineer Willie Houtman from New Zealand. "This will be my third campaign south and I'm feeling confident we can stop the harpoons this season."

The Sea Shepherd crew will include volunteers from Australia, New Zealand, Canada, the USA, Great Britain, Bermuda, France, Hungary, Germany, the Netherlands, Sweden, and Brazil.  The crew are men and women from all walks of life ranging in age from 18 to 60.

Last season, the Sea Shepherd crew chased the whalers for more than 3,000 miles along the Antarctic coast. They forced the whaling fleet supply vessel to flee the area and engaged the Japanese fleet three times.

"Last year the fleet was faster than we were and they were able to outrun us." said Captain Watson. "This year we have a few surprises for them." 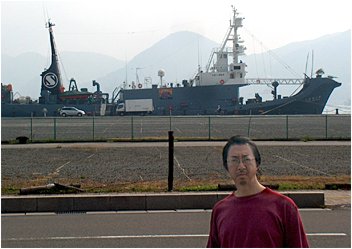