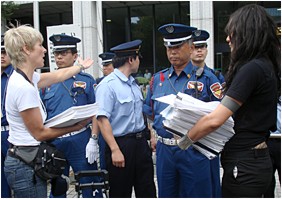 On October 5, 2007, actress and Sea Shepherd Director Persia White was denied entry into the Japanese Ministry of Health building and refused the meeting promised to Sea Shepherd earlier this week. Accompanying White were Sea Shepherd activists Allison Lance and Danielle Thompson, as well as singer/songwriter Saul Williams. The four had traveled to Tokyo in order to deliver an urgent message and a hefty stack of petitions, signed by thousands of concerned individuals, to the Japanese government. The message: STOP the dolphin slaughter and STOP feeding mercury-contaminated dolphin meat to innocent Japanese school children.

Lance and Thompson have been stationed in Tokyo since September, spreading the word about the brutal dolphin slaughter and the toxic school lunch program. White and Williams flew to Japan from the United States specifically to meet with the Minister of Health-the very meeting which was inexplicably denied. Previously, Lance had called the Ministry of Health to request a meeting with Assistant Director Tanaka. Tanaka's office refused to cooperate, but Lance succeeded in securing a meeting with Mr. Imanishi from the Food Standards Division of the Ministry of Health. This meeting was scheduled for 2:00 pm on October 5. 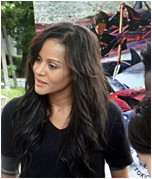 White, Williams, Lance, and Thompson arrived early for this meeting to find the Ministry of Health's front entrance under heavy guard, whereas on previous visits, only two guards had been positioned out front. After a brief press conference, interviews, and photos, the four attempted to enter the building for their 2:00 pm meeting with Mr. Imanishi. At that time, it became clear that the meeting had been reneged. Guards with stern faces and blank stares blocked the entrance to the building with arms crossed, repeating the words "no appointment." As Lance pleaded with the guards and attempted to prove to them the validity of this appointment, she was disregarded, and members of the press were instructed to stop filming immediately.

Lance and White repeatedly asked the guards to at least deliver the stacks and armloads of petitions they carried to Mr. Imanishi, but the guards refused. Requests for a representative from the Ministry of Health to come down and accept the petitions were also flatly denied. Just prior to leaving, Lance shouted into the building that Mr. Imanishi was wrong for not 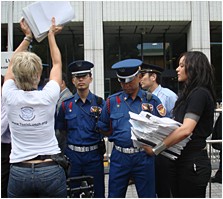 honoring his commitment to meet with Sea Shepherd, and that he was responsible for both the barbaric slaughter of dolphins and the poisoning of Japanese school children.

White, Williams, Lance, and Thompson then walked around the block to the Ministry of Fisheries and asked to speak with Mr. Moronuki, Deputy Director of Far Seas Fisheries. They were again denied entry into the building, and after much back and forth were told that Mr. Moronuki was in a meeting. They were instructed to call the office on October 9. Throughout both attempts to gain meetings with government officials, Sea Shepherd activists were photographed from a distance by two men, who followed them from the Ministry of Health building to the Ministry of Fisheries building.

Lance and Thompson will remain in Japan and continue to attempt delivery of these urgent petitions. In the meantime, they will persist with Sea Shepherd's campaign to generate public awareness and opposition to the dolphin slaughter and toxic lunch program.  The campaign is rapidly gaining momentum, and the Japanese public continues to express shock and outrage upon hearing this important message withheld from the people by their own government. Sea Shepherd urges concerned citizens to take action on this issue today!