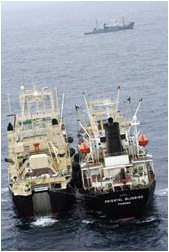 The Japanese fleet stopped running today. They stopped to refuel from a Panamanian tanker named the Oriental Bluebird.

The rest of the fleet has appeared at the rendezvous point.

We are not expecting Australia to protest this because the Australian government appears to have given the Japanese whalers carte blanche to do whatever they like in the Southern Oceans.

The Japanese fleet steamed over 2,000 miles to refuel. Why did the tanker not go to the fleet? Why waste fuel and ceasing whaling operations for 10 days to refuel?

It took Japan a few days to respond to the tip Sea Shepherd received from a source in Japan that a Japanese warship was en route to assist the Japanese fleet. They deny this and claim it was a publicity stunt by Sea Shepherd.

We never claimed it to be a fact. We reported that we had received a reliable tip from a reliable source. Japan has sent a warship to intervene against an environmental protest before so it would not have been unprecedented. The possibility remains that the warship is still on the way despite the Japanese denial. It is possible that they have called it off. It is possible that our source was wrong. We stand by the fact that we received a reliable tip from a reliable source. This source has led us to illegal fishing activities by Japan in the past so we have no reason to doubt the integrity of the report.

Now we wait to see what Japan is going to do. Will they resume whaling and where? Will they return to the East or remain in the West and work eastward?

The Sea Shepherd flagship Farley Mowat still has enough fuel to remain in the field for three more weeks of continued steaming so we still have the opportunity to intercept them.

"The Japanese fleet will have to be wary of every iceberg they see from here on in. We may be hiding behind one of them ready to ambush the bandits as they pass by," said Captain Paul Watson. "We intend to make this dangerous ground for whalers. We intend to enforce the law"

The Sea Shepherd ship Farley Mowat is only a few hundred miles from the Japanese position.