The Sea Shepherd Conservation Society had no plans to board any of the Japanese ships this season.  Captain Watson was amused and flattered that they had gone to such an expense in response to last year's boarding episode that had created an international incident and brought the story of illegal Japanese whaling into the headlines in Japan.

The crew of the Sea Shepherd has observed this anti-boarding device on the Yushin Maru #2 on December 2nd but it had not been deployed. When the Steve Irwin caught them unaware, the Japanese crew scurried across the deck to begin untying the net to deploy it. The two ships were separated by dense fog and heavy ice conditions before the net was deployed. 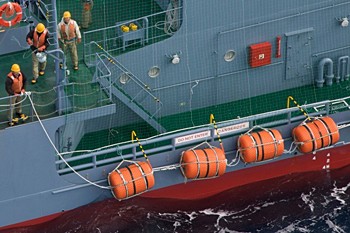 The Japanese harpoon boat Yushin Maru No. 3 deployes anti-boarding nets,
floats, and spikes.  The nets run nearly the entire length of the
vessel from bow to stern on both port and starboard sides.
Photos: Eric Cheng / Sea Shepherd Conservation Society