The Sea Shepherd helicopter returned to the Steve Irwin for safety from the LRAD, at which point, the Shonan Maru No. 2 increased speed and aimed their water canons in an attempt to destroy the helicopter on the landing pad. This occurred while the crew was attempting to secure the helicopter.

Captain Watson responded by deploying a 150-meter line aft of the vessel to force the Shonan Maru No. 2 to maintain a safe distance. The Sea Shepherd ship is undamaged and the crew safe.

Sea Shepherd has reported the incident to the French authorities. The pursuit continues.

“The situation is now very dangerous,” said Captain Paul Watson. “We have deliberately led the Japanese ship into thick ice in order to lose them in the ice. The ice bergs could easily damage either vessel.” 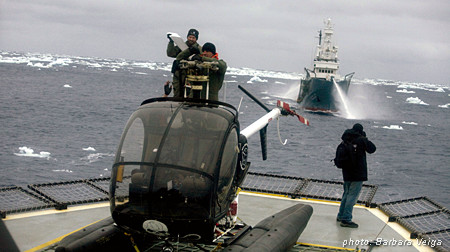