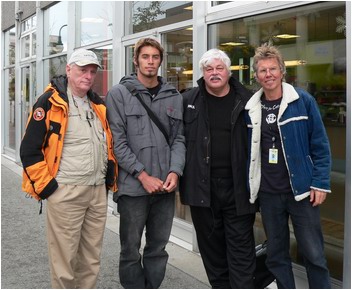 It was a scene that illustrated the incredible arrogant cruelty of humanity. Inside the walls of the Hotel Captain Cook in Anchorage, the delegates to the International Whaling Commission (IWC) had reached consensus on the aboriginal quota for the Caribbean nation of St. Vincent and the Grenadines. Twenty humpbacks were ordered to be executed by the "aboriginal" whale killers of St. Vincent and the Grenadines over the next five years.

Yet, the whale killers of St. Vincent and the Grenadines are hardly deserving of the title "aboriginal." Not a one of them is an indigenous American. Their roots are African and the slave trade. How is it that the Makah Indians of Washington State - a traditional whaling society - are barred from whaling yet non-natives of the Caribbean can be granted a quota of 20 endangered whales to be cruelly harpooned?

Sea Shepherd Conservation Society certainly does not condone the Makah proposal but it is simply irrational to give a quota of endangered humpbacks to the non-traditional killers of the Caribbean and to deny a quota of fewer gray whales to the Makah.

The Siberians were given a quota of 169 gray whales despite the fact that the gray whales numbers are falling due to shortages in their food supply.

The Alaskans were given a quota of endangered bowheads yet they have no real subsistence need for killing these long-living sentient beings.

Sea Shepherd is opposed to aboriginal quotas. This so-called aboriginal demand for whales has weakened the IWC overall. The conservation-oriented nations would be taking a stronger stand against illegal Japanese, Icelandic, and Norwegian whaling if not for this guilt-driven need to support "traditional" slaughter.

The killing of an intelligent, socially complex, highly evolved sentient being like a whale is an act of murder.

All the great whales are in danger. All of them! They are threatened by pollution, global warming, overfishing, habitat destruction, ship traffic, military weapons testing, and hunting. The Inuit are now killing more whales with far fewer people now than they were a century ago and they are using modern weapons, equipment, and advantages that were certainly not part of any "traditional" way of life.

The Makah want to preserve the "tradition" of killing whales as they ignore the other lost Makah arts and even lose the use of their language. Why? Because preserving the other arts and their language requires discipline and a real resolve to preserve a culture, whereas any coward can stick a harpoon into a defenseless whale. 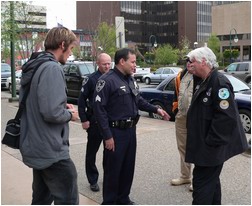 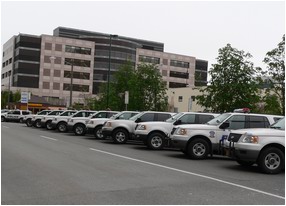 Left: Anchorage police officers instruct Captain Watson being told not to step off the sidewalk
onto hotel property as Dave Rastovich looks on.
Right: A large number of police cars lined up in the Hotel Captain Cooke Hotel parking lot.

The Hotel Captain Cook said that I was banned because of my history of disrupting the meetings of the IWC yet neither Sea Shepherd nor I have ever disrupted an IWC meeting. What we do disrupt is illegal whaling activities on the high seas.

Sea Shepherd is concerned that New Zealand is co-sponsoring this resolution with Japan. 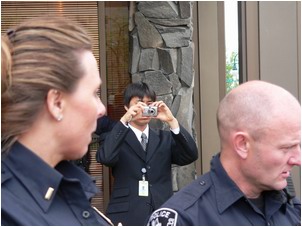 The Japanese are making diplomatic efforts to prevent Sea Shepherd from sending our ships back to the Antarctic Whale Sanctuary to intervene against their illegal whaling activities. Last year they had our flags struck by applying pressure on Canada, the United Kingdom, and Belize. This year they will be trying to get New Zealand and Australia to refuse to give us clearance to depart for Antarctic waters.

Sea Shepherd knows that we are up against one of the most powerful and wealthiest nations on Earth, and that we have few resources other than our integrity and courage to oppose them.

But, it is because we have the integrity of our cause and the courage of our volunteers that we believe we can make a stand and that we can defeat the murderous and destructive killing agenda of the Japanese whaling fleet.

We shall return to Antarctica in December no matter what obstacles are put before us to bar us from coming. That is a promise, a commitment, and a pledge - nothing that Japan can throw at us short of assassination will deter us.