The report concludes that the Namibian seal watching tourism industry is increasing in popularity and bringing in large and increasing profits, but it is being seriously threatened by the Namibian seal slaughters held at the Cape Cross Seal Reserve and, at Atlas and Wolf Bay in the De Beers diamond mining areas.

Despite statements to the contrary by Namibia’s self interested politicians, the report concludes that the slaughter nets Namibia far less in real profit, than the profits gained from seal watching tourism. As an example, in 2008, the seal hunt generated only £300,000 while seal watching generated £1.2 million in direct tourism expenditure in the same period. This information completely contradicts the position of the Ministry of Fisheries and Marine Resources of Namibia, that the seal slaughter generates enormous revenue for the country. 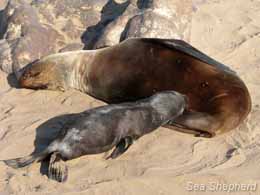 “When we were protesting at Cape Cross just weeks ago” said veterinarian Andre Menache, “we spoke to many tourists, all of whom were shocked to find that seals were brutally slaughtered each morning between dawn and 7.45am, with the beach cleaned up just in time for tourists to arrive at 8am. The international community will not accept this for long.”

Seal watching tourism is an important part of the economic growth of Namibia with as many as 10% of tourists (more than 100,000 in 2008) having paid for the pleasure of watching seals in their natural habitat. Based on current growth trends, the report predicts that by 2016 as many as 175,000 tourists will participate in seal watching, generating close to £2 million in direct revenues.

Seal watching also allows a far greater section of the Namibian economy to benefit from the trade, as the growth of seal watching helps boost tourism support services such as shops, eco-tours, hotels and restaurants.

There is debate about how many local people are employed in the seal slaughter, figures range between 30 and 90 people working for between 3 and 4 months per annum, earning from $2-$4 per day. An average of these numbers is $18,900. Sea Shepherd have offered the local community $30,000 per annum if the seal slaughter does not take place. This money is to be used to provide training and local employment in the ecotourism sector surrounding the seal colonies.

With the employment argument removed, the remaining area of contention seems to be the Namibian governments position that the seals kill a large amount of fish, which is they claim the cause of Namibia’s declining fish stocks. This will be a significant discussion point at the meeting in Windhoek, with environmentalists, NGOs and marine biologists.  The decision by the Fisheries and Marine Resources Ministry to increase this quota to 600,000 tons from the 300,000 tons fishing quota already provided to the huge international fishing fleet is what will cause the real demise to this fishery. A very similar case to the east coast of Canada in the early 1990s, where Sea Shepherd was actively engaged and successful in bringing about an end to the trade of seal products into the European Union just a few years ago.

An end to the slaughter? 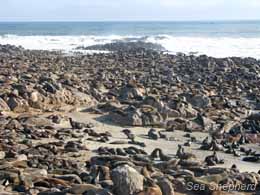 The seal slaughter, now international news, will destroy the seal watching and associated tourism industry of Namibia, so the Ministry of Fisheries and Marine Resources has two options:

1.   End the seal slaughter, then witness a growth in tourism revenue and an associated increase in employment, then benefit from a corresponding increase in fish stocks as the marine eco system balances itself naturally, or

2.   Continue the slaughter, witness a huge downturn in tourism, associated local employment and income, and watch as the marine eco system falls apart.

On September 20th, in Namibia’s capital city Windhoek, Sea Shepherd will try and persuade the Namibian government to choose option 1.

Thanks to WSPA, HSI and RFA for funding this report and for the information contained, some of which we have included in the article above.