In the Aftermath of the Storm May the Curse be Lifted

In the Aftermath of the Storm May the Curse be Lifted

The storm has abated, the sun is shining, and the pressure on the ice is beginning to release. That's the bad news. The good news is that many sealing vessels were damaged, two were sunk, and most of the others continue to be locked into the ice.

Another bit of good news is that Sea Shepherd Advisory Board Member Bob Talbot arrived in one of two helicopters chartered by the Humane Society of the United States (HSUS), and retrieved all the photos and video we have taken since the opening of the seal slaughter on March 29th. This means that the evidence of the assault by the sealers on our crew will not be captured, confiscated, or destroyed by the Department of Fisheries and Oceans.

Even better news was the radio message intercepted from the sealer Polar Venture. Apparently that vessel has been stuck in the ice since March 26th and has not taken a single seal. They reported that they just wanted to go home.

The crew who were assaulted have requested that charges be laid against the sealers who attacked them. The Mounties are investigating the incident and Bob Talbot will be delivering video of the assault to the Mounted Police headquarters in Charlottetown, Prince Edward Island.

The sealers who assaulted the crew were from the Brady Mariner, a Newfoundland fishing vessel built in 1988 with the official number of 0810609 and registered in St. John's, Newfoundland. The vessel was formally known as the Fundy Leader.

The video sent to the Mounted Police vividly illustrates the hostility and aggressiveness of the sealers in their attack on the Farley Mowat crew.

One sealer boasted that he killed seals, "Because I loves to kill seals, I enjoys killing seals."

Lisa Shalom, the one Canadian of the eleven crew arrested, was released last night and turned out on the streets of Charlottetown without funds or means of returning to the ship. Sea Shepherd found her a room for the night at a local hotel.

According to Lisa, all eleven crew were kept in plastic handcuffs for nine hours and had to spend the time sitting on a metal deck on board the ice breaker Amundsen.

The ten remaining crew, citizens of the United States, Sweden, Britain, and the Netherlands, were kept in confinement overnight and are expected to be brought to court this morning in Charlottetown.

The Sea Shepherd ship Farley Mowat is beginning to make progress through the ice. It is about fifteen miles to open water. The Coast Guard icebreaker Earl Grey is engaged in breaking out the sealing vessels and the Farley Mowat is working its way towards them to take advantage of the Coast Guard services to the sealers.

"The Coast Guard are certainly the handmaidens to the killers out here," said Captain Paul Watson. "It seems to be nothing but 'yes sir, Mr. Sealer sir, whatever you want Mr. Sealer sir.'  I'm surprised they aren't flying in Tim Horton donuts and coffee to these boys."

The cost of these three icebreakers is enormous. In addition the Department of Fisheries and Oceans supplies aircraft to locate seals for the sealing vessels. Yet, the Canadian government insists they do not subsidize the sealing industry. One thing for sure, the sealers are not paying for these services. The assistance comes free of charge and that is a subsidy by any definition of the word.

The sealers are reporting that they are seeing few seals. Hopefully, the storm scattered the seals to safer waters. It appears that the quota will not be met in the Gulf of St. Lawrence this year. Unfortunately, the numbers short of the 90,000 allotted to the Gulf will be added to the Newfoundland Front slaughter that is scheduled to open on April 12 off the northern coast of Newfoundland and the southern coast of Labrador.

With luck, Mother Nature will ravage the sealers again and block their ability to kill.

The presence of the Farley Mowat, the storm, and the assaults on and arrests of the Sea Shepherd crew have provoked international media interest in the seal slaughter. Yesterday, Captain Paul Watson did onboard telephone interviews with journalists from Los Angles to Auckland, from Barcelona to Mexico City, from London to Amsterdam.

The international movement against the horrifically-cruel and ecologically-damaging seal slaughter is building. Seafood distributors, restaurants, and individuals are signing onto the Canadian seafood boycott.

The empty rhetoric of the Canadian Department of Fisheries and Oceans is no longer credible. The DFO says that the sealers only kill adult seals yet every seal kill documented by our crew was between three and six weeks of age. Most of them were born just a month ago.

The DFO says that the hunt is humane and every seal dies instantly. We have observed once again that this is a lie. We saw sealers kick pups in the face and skin them as they writhed in agony on the ice. If the hunt is as humane as the government insists then why do they ban cameras from the ice without official permission? The censorship is blatant and few believe the DFO's lies anymore.

We also were able to expose the incredible irresponsibility of the Canadian Department of Fisheries and Oceans in issuing sealing licenses to vessels that clearly have no business being in these ice conditions. The Canadian Department of Transport should also be held accountable for allowing these vessels into the Gulf under such conditions. Nothing is being said about the oil pollution from the sinking of the vessels and little is being said about the lack of resources to address the numerous distress alerts issued by the sealers.

The Canadian Department of Fisheries and Oceans also promotes the myth that the sealer is a hard-working courageous man just trying to support his family by participating in a dangerous occupation in harsh conditions.

Yet the truth is, that there is nothing courageous about walking around in a nursery bashing baby seals in the head. The amount of money each sealer makes is relatively small - on average only $800 and the costs to many of them will be significantly more this year due to losses of vessels and equipment.

And when these "brave hardy men" fall to the fury of the elements, they are quick to go running for help to the Coast Guard with pleas for ice-breaking assistance and help in finding seals to kill. Now many of them are scurrying home to Newfoundland and the Magdalen Islands with few seals and tales of woe.

The true heroes out here on these remote ice floes are the young seals who valiantly attempt to escape their killers and whose cries echo mournfully across the blood stained ice. The crew of the Farley Mowat have seen so many of them try to defend themselves from the cruel hak-a-pik and attempt to cling to life as their skin is ripped from their convulsing bodies.

And above them, knife in hand, cigarette dangling from cruel lips, an ignorant, uneducated, inbred, sadistic brute sneers, and slices the young body from throat to groin exposing the beating heart that still throbs with life and futile hope.

This is mankind at his most extreme savagery and there is little that is noble or inspiring in such an image.

For out here on the frigid harsh expanse of drifting ice, mankind wallows in the terrible darkness of his own cruelty and contempt for life.

When these men go to church in the next few days, they will confess their sins and be absolved, but the stain, the stench, and the vicious evil of their actions out here on the ice will forever be etched into the book of humanity in yet another testament to our dark and base nature.

Will we ever escape from this hell that envelops our soul? A first step in such a direction would be the abolishment of this obscenity, this horrific slaughter and destruction of innocence, this ecological insanity and national curse called the Canadian seal hunt. 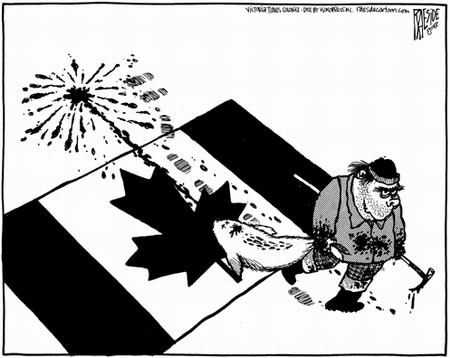