In Sadness We Mourn the Death of Captain Albert Falco

The officers and the crew of the Calypso inspired two generations of divers and conservationists. Captain Falco, along with Phlippe Cousteau and Captain Jacques Cousteau were among the few men that I can say were of a great influence in my life. Sadly the world has lost all three.

Captain Falco saw the diminishment of biodiversity on our oceans over a span of nearly seven decades. He was dedicated to the protection of life and habitats in the sea. He was a legendary mariner and diver, oceanographer and conservationist and the world is a better place because of him.

He will always be remembered and honoured by all of us in the Sea Shepherd Conservation Society. 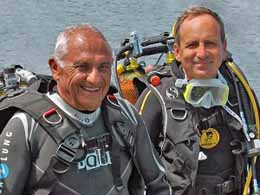