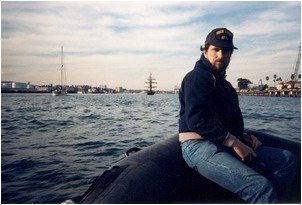 Captain Paul Watson was at sea when he heard the news by e-mail. In a message sent back to Sea Shepherd headquarters, Captain Watson said the following:

"Ben and I had many adventures together, some were dangerous and some were fun. We shared many of the same interests and loves. When I think of Ben, I will remember him walking across the heaving, buckling ice floes alongside of me as we made our way over thirteen miles of open sea ice to rescue seals. I will remember him swimming with dolphins off Key West. I will remember him walking with me on the lonely beaches of the most remote Aleutian Islands. I will remember him swimming with me with the pink dolphins in the Amazon. And I will remember him clad in the cardboard armor of a turtle as he took to the streets in Seattle. He was a lover of life who lived life with the joie de vie that was both rare and inspiring. He leaves this planet having contributed more than he took from it, which is also both rare and inspiring. He will be remembered and he will be recognized as one of the great environmental warriors of his generation."

Ben White died peacefully by the sea on San Juan Island, surrounded by family and friends. His friends have made him a coffin fashioned from cedar, yew, juniper, and mahogany. He will lie forever within the embrace of the spirit of four great tree species - a most excellent place to rest for this gentle man of the trees. He will be laid to rest in the San Juan Community Cemetery. His pall bearers will be the men and women of the Natural Guard who will carry his casket behind an honor guard of eight of his WTO turtles accompanied by drummers and marimbas.

On July 8th of this year, at the Animal Rights 2005 Conference in Los Angeles, CA, Captain Watson accepted the In Defense of Animals (IDA) Lifetime Achievement Award for Ben. IDA founder and president Elliot M. Katz, DVM, proudly presented the award, but Ben was unable to receive the honor in person because he was in the hospital batting an agressive and terminal form of abdominal cancer. 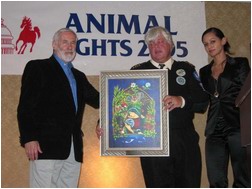 Benjamin White will always hold a place within the history of the Sea Shepherd Conservation Society and all the other organizations that he worked with including In Defense of Animals, the Animal Welfare Institute, Friends of Animals, the Ruckus Society, and PETA.

He will be missed.