Imagine a World Without Fish

The End of the Line, the first major feature documentary film revealing the impact of overfishing on our oceans, had its world premiere at the Sundance Film Festival in the World Cinema Documentary Competition. Sundance took place in Park City, Utah, January 15-25, 2009.

In the film, we see firsthand the effects of the world’s global love affair with fish as food. 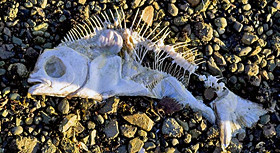 It examines the imminent extinction of bluefin tuna brought on by increasing western demand for sushi; the impact on marine life resulting in huge overpopulation of jellyfish; and the profound implications of a future world with no fish that would bring certain mass starvation.

Filmed over two years, the movie follows investigative reporter (and author of The End of the Line) Charles Clover as he confronts politicians and celebrity restaurateurs, who exhibit little regard for the damage they are doing to the oceans.

One of his allies is the former tuna farmer turned whistleblower Roberto Mielgo, who is on the trail of those destroying the world's magnificent bluefin tuna population.

Filmed across the world – from the Straits of Gibraltar to the coasts of Senegal and Alaska to the Tokyo fish market – featuring top scientists, indigenous fishermen, and fisheries enforcement officials, The End of the Line is a wake-up call to the world.

Scientists predict that if we continue fishing as we are now, we will see the end of most seafood by 2048.

The End of the Line chronicles how demand for cod off the coast of Newfoundland in the early 1990s led to the decimation of the most abundant cod population in the world. In 1984, Sea Shepherd Founder and President Captain Paul Watson warned the Canadian government that the Northern Cod fishery will collapse due to over-fishing unless immediate action is taken. The government ignored the warning, so in 1993 Sea Shepherd sailed to the Nose and the Tail of the Grand Banks and chased trawlers away that were engaged in overfishing. [Captain Watson was arrested and jailed for this, but two years later was acquitted]. The film confirms that, sadly, Sea Shepherd predicted this correctly.

The film also chronicles how hi-tech fishing vessels leave no escape routes for fish populations and how the idea of fish farms as a solution is a fallacy. 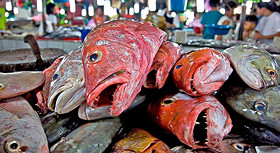 The film lays the responsibility squarely on consumers who innocently buy endangered fish, politicians who ignore the advice and pleas of scientists, fishermen who break quotas and fish illegally, and the global fishing industry that is slow to react to an impending disaster.

The End of the Line points to solutions that are simple and doable, but political will and activism are crucial to solve this international problem.

We need to control fishing by reducing the number of fishing boats across the world, protect large areas of the ocean through a network of marine reserves off limits to fishing, and educate consumers that they have a choice to end their seafood consumption entirely for the benefit of all ocean ecosystems.

Sea Shepherd Director Kurt Lieber commented, “Even though this movie did not touch on everything that Sea Shepherd is about, we hope it is a springboard for further dialogue because everyone on this planet is affected by overfishing and overexploitation of the oceans’ resources.”

We urge you to see the movie, take personal responsibility and actions where you can. And we continue to welcome your support for our direct action work to save fish and all ocean wildlife.

For more information and to stream the movie, visit:

Quotes from the Makers of the Film

We must stop thinking of our oceans as a food factory and realize that they thrive as a huge and complex marine environment. We must act now to protect the sea from rampant overfishing so that there will be fish in the sea for our grandchildren and great-grandchildren. -- Charles Clover, the book's author

Overfishing is the great environmental disaster that people haven't heard about." A recent global conference about bluefin tuna stocks saw almost no media coverage in the U.S. We hope this film really sounds the alarm. We can fix this problem starting right now. -- Producer George Duffield

Reading the book The End of the Line changed my life and what I eat. I hope the film will do the same for others. -- Producer Claire Lewis