Renegade Icelandic whalers slaughtered their first whale of the season at 22:40 GMT on May 26th, 2009.

Hello- I am writing to you because I do not know what else to do! The first whale was murdered or at least shot at 22:40 GMT 26th of May! If not killed immediately it will be tied to the boat and dragged around suffering the anguish until next victim is found and shot! I am so, so ashamed now to be an Icelander! There is permission to hunt and kill 99 more. The whale watching industry is devastated and those Icelanders that are against these murders. It is as if our government has lost their ears. A few powerful bullying whalers have got their will and now the killings have started! The only way to stop this is to let it cost the Icelandic economy more to hunt and kill whales than the few foreign currencies earned by few by selling whale meat! Iceland should be banned and Icelandic products until these killings have stopped. Living in this small community, I actually fear for my safety going out with my opinion in public! Whalers are a bullying tribe, and a shame for our country! Somehow, I wish the worldwide community to put pressure on the Icelandic government. Please help me and make these killings stop!

The Icelandic whalers are targeting endangered fins in blatant violation of the global moratorium on commercial whaling and in defiance of the regulations of the Convention on the International Trade in Endangered Species (CITES). 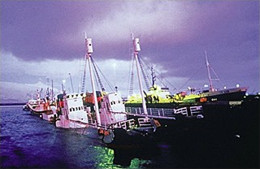 In 1986, the Sea Shepherd Conservation Society shut down illegal whaling activities in Iceland by scuttling half the Icelandic whaling fleet.

In 2007, the Sea Shepherd ship Farley Mowat was en route to Iceland to oppose illegal whaling when Iceland announced it would discontinue whaling activities.

Iceland is one of the world's three criminal whaling nations. This axis of brutality and eco-crime includes Japan, Norway, and Iceland.