"Total allowable takes of fin and minke whales for the next five years will be according to scientific recommendations of the (Icelandic) Marine Research Institute," the minister said.

Gudfinnsson's announcement follows suggestions by International Whaling Commission officials that Japan could be authorized to resume commercial whaling off its coast, in return for killing fewer whales for scientific research in the Antarctic.

Iceland, Norway and Japan are the only countries killing whales authorized to illegally sell their meat. This year, Iceland and Japan flagrantly violated the regulations of the Convention on Trade in Endangered Species when Iceland shipped Fin whale meat to market in Japan. 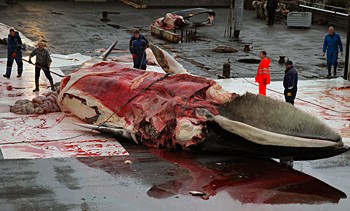