A clearly agitated Loyola Hearn, Canada's Minister of Fishy Business held a media conference in Ottawa on Saturday to deliver a vindictive and clearly angry denunciation of Captain Paul Watson and the crew of the Sea Shepherd Conservation Society ship Farley Mowat. 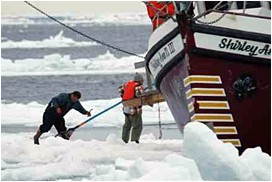 Unable to defend the incompetence of the Department of Fisheries and Oceans, Hearn decided to get personal by referring to the Sea Shepherd Conservation Society as "A bunch of money-sucking manipulators."  Hearn also said, "And their sole aim is to try to suck as much money out of the pockets of people who really don't know what's going on."

Hearn accused Captain Watson of directing the campaign from his "posh New York hotel suite where he was dining on steak and lobster." That was a revelation to Captain Watson who is a vegetarian and last night slept on the couch of a friend in Brooklyn.

"Mr. Hearn has the resources of the RCMP at his disposal and they can check my credit card records and they will find just how frugal we are," said Captain Watson, "but why let evidence and the facts get in the way of good propaganda spin?"

Captain Watson is currently driving to Cape Breton Island from New York City. "I know that Hearn seems to think we are fabulously wealthy but the fact is that the flight from New York to Sydney is simply too expensive for me to justify," said Captain Watson.

Ironically the Sea Shepherd Conservation Society is the smallest and the most under-funded group opposing the seal slaughter. The crew are volunteers. "I wish we were as wealthy as Hearn thinks we are, but no such luck," added Watson.

In authorizing the unlawful boarding of a foreign yacht in international waters, Hearn said, "We will continue to protect sealers while ensuring the sustainable and humane management of the hunt so it continues to provide economic opportunities for Canada's coastal communities in the future."

The question is; what is Hearn protecting the sealers from? The Sea Shepherd crew are armed with cameras. The only threat to the safety of the sealers seems to be from the Canadian government. Hearn sent hundreds of flimsy wooden and aluminum hulled vessels into very treacherous ice conditions and because of Hearn's incompetence and his political ambitions four sealers are now dead. It was his policies that killed these men and now he is using Sea Shepherd to distract from his incompetence by focusing the anger of the sealers towards hating both the seals and those who defend them and of course the sealers are dumb enough to be easily persuaded.

The Canadian Coast Guard along with the Royal Canadian Mounted Police and Federal Fisheries officers staged an armed boarding of a moving Dutch registered yacht in international waters. This was a dangerous and desperate attack. The Farley Mowat crew did not resist the boarding for fear that some of the Canadian officers would be hurt.

Despite this the Federal boarding party was rude, aggressive and violent. Amber Paarman, 24 of Capetown, South Africa was roughed up and received a blow to the head when she tried to resist being manhandled by a Fisheries Officer. It is not known if any other crew have been injured and the crew are not feeling very safe being under tow by the Canadian Coast Guard who have admitted they lack both a manual and experience in towing vessels in ice.

In seizing the Farley Mowat and arresting the Sea Shepherd crew Loyola Hearn has done something that Sea Shepherd hoped he would do but we did not believe he was stupid enough to do - an unlawful boarding of foreign registered vessel in international waters. With the European Parliament on the brink of voting to ban seal products into the European market, Loyola Hearn decides to arrest Europeans for the "crime" of documenting incidents of cruelty on the ice.

The man has not even read Managing Fisheries for Dummies and in his zeal to kiss the bottoms of the seal killing crowd he has thrown reason out the window and is now shooting ad hominem attacks from the hip and letting his mouth run away with hysterical mutterings that are both incoherent and mis-leading. Loyola Hearn is certainly the latest Nufie joke and the joke is about to backfire in his face.

We are approaching the end of days for the barbaric and sadistic seal slaughter industry. And Loyola Hearn seems to be the right Minister in the Right place with the right foot in his mouth to assist us in bringing about the day when seals will be left unmolested and unharmed in their nurseries.