Woodside — along with joint-venture partners Shell, BHP Billiton, BP, Mitsubishi and Mitsui — is planning to build the giant gas factory at James Price Point (or Walmadany, as the indigenous Goolarabooloo people call it), with a huge breakwater and dredged channel right through the whale nursery.

About 34 million tonnes of dredge spoil will be dumped back into this pristine marine ecosystem which will have a disastrous effect on rare dolphins, and the local turtles and dugong population. The project also threatens 130-million-year-old fossilized dinosaur footprints, traditional Aboriginal cultural sites and endangered animals such as the bilby.

Traditional Owner Philip Roe said: “These gas refineries would destroy our way of life and our law and culture which is the oldest surviving in the world. It is our responsibility to look after the world’s largest whale nursery.” 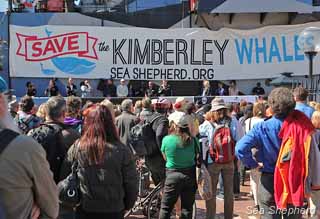 Sea Shepherd Australia Director Jeff Hansen addresses crowd at rally for Kimberley whalesSea Shepherd’s Jeff Hansen said: “The Kimberley humpback whale nursery is of global significance and concern. If our Australian federal ministers allow this gas hub to go ahead then it would be quite hypocritical for the Australian government to condemn the Japanese whalers. If the Australian government green lights this gas hub project, there will be whale deaths inside the world’s largest humpback nursery.”

“If someone wanted to destroy the Sydney harbor bridge or the opera house, Australians would not allow it and nor should we allow Woodside and the joint venture partners destroy 130 million-year-old dinosaur footprints, beautiful aboriginal culture and songline that dates back over forty thousand years and the world’s largest humpback nursery.  You can not put a price on the Kimberley, because it is priceless, it is one of the last great wilderness areas left on the planet.”

Dr. Brown said: “The impact of Woodside’s $45 billion project includes a 2.5 km breakwater and a 6 km channel dredged 300 metres wide out to sea across the whale nursery, with a city suburb-sized gas factory ashore over the Traditional Owners’ land. It would be cheaper to move the factory further south, but the whale nursery has nowhere else to go.”

The Wilderness Society’s Glen Klatovsky said: “The fight against the proposed gas hub at James Price Point has slowly but steadily built momentum across the country, starting with the brave Broome community which has fought this project for several years. It is now the responsibility of all concerned Australians that we combine our efforts with the local community to ensure this extraordinary place retains its environmental and indigenous cultural values.”

Martin Pritchard, director of local group Environs Kimberley, said: "If these gas refineries went ahead there would be complete destruction of 50 square kilometres of one of the most pristine marine areas on the planet. It would also open the rest of the spectacular Kimberley wilderness to industrialization.”

More than five thousand Sydneysiders got a sneak peek of Sea Shepherd’s new Kimberley Miinimbi video while partaking in a free tour of the Steve Irwin.  The video showcases one of the last wilderness areas on Earth and what all Australians and the world stand to lose if Woodside’s gas hub goes ahead in the Kimberley.

Please write to the Honorable Tony Burke MP, Federal Environment Minister, letting him know that you do not support the gas hub in James Price Point. 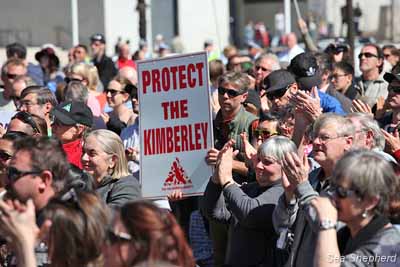 Hundreds of supporters attend rally for Kimberley whales in Sydney