Further aggravating the problem is rising ocean temperatures and the spread of germs by the seagulls. Several of the whale’s injuries are from a so far unknown origin, but it can be expected that the transfer from garbage dumps to the whale’s backs could very well be the cause for some of these.

Sea Shepherd Argentina has been talking to the town’s officials in hopes of eliminating the open-air dumps.  Recycling plants have indeed replaced all three plants, but according to people in the area, much of the garbage has yet to be cleaned up.

As for the trawlers, no action whatsoever has being taken.

The decree to kill the seagulls is not publicized because the authorities are well aware this may cause an outbreak of protests, nevertheless it has now become public knowledge. The seagulls are being shot, put in gas chambers, and their nests are being destroyed, killing the eggs and their young.

In 2010 Sea Shepherd Argentina was alone in the fight to defend the seagulls. We were accused of only trying to establish our name in the country. Now many NGO’s are advocating for the same. It is time to keep pressure on the local authorities and have them reverse their decree. 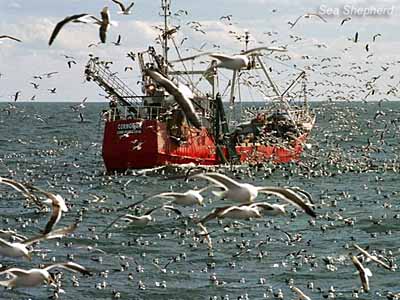