How the IWC Nations Are Voting

How the IWC Nations Are Voting 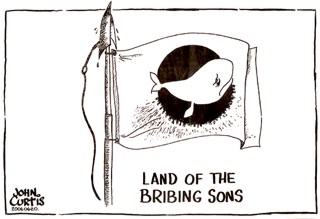 Vote Number 2 - Japan Moves to Remove Openess at the IWC and Proposes Secret Ballots. They Failed.
The 2nd vote was to introduce secret ballots. The vote was 33 for the whales and 30 for the whalers. This would have allowed nations to vote for Japan without repercussions from their own citizens.

Vote Number 4 - Japan Moves to eliminate the SOuthern Oceans Whale Sanctuary. They Failed.
The 4th and most important vote was a Japanese proposal to eliminate the Southern Ocean Whale Sanctuary. It needed a two thirds majority but Japan was hoping for a simple majority to lend legitimacy to their illegal slaughter of whales in Antarctic waters. The vote was 28 for Japan and 33..

Vote Number 5 - The Infamous St. Kitts Declaration.
Japan Moves to condemn the global moratorium on commercial whaling, to accuse the whales of eating all the world's fish and to condemn non-governmental whale conservations groups as "threats". They win the simple majority vote by one but failed to get the two-thirds majority required. Nonetheless Japan declares their first moral victory in 2o years.

Passed by 33 votes to 32, the resolution stated the whaling ban was no longer necessary. It said whales were responsible for depleting fish stocks and non-governmental organizations were a "threat". This motion required a two-thirds majority to win.

Japan and the whalers have lost all five votes on resolutions brought before the IWC to undermine the conservation of whales.

The Voting Record by Nations

* Missed denotes that the country did not show up for the vote or did not qualify for the vote because of non-payment of membership fees.

The whale conservation vote would have won out in every case if the memberships fees for Kenya, Costa Rica and Peru had been paid.

If the memberships for these three nations can be paid by pro-whale governments and/or NGO's then these three votes can be had for the whales next year,

The Sea Shepherd Conservation Society does not officially attend the IWC meetings as we are the only organization in the world to be banned from attending due to our successful interventions against illegal whaling over the lat 30 years.

What these rulings mean to Sea Shepherd is that we continue to have the legal credibility for continued interventions against unlawful whaling activities.