Hong Kong Hospitals Give Aid And Comfort To The World's Sharks

Hong Kong Hospitals Give Aid And Comfort To The World's Sharks

"That's what Walt would have wanted," said Sea Shepherd's Founder and President Captain Paul Watson to the New York Times. 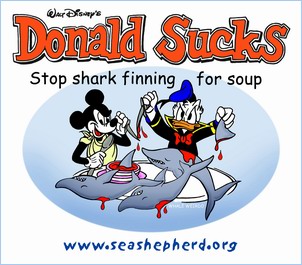 Now it appears that Disney's example has had an influence. This week the Tung Wah Group of Hospitals, the oldest and largest charitable organization in Hong Kong, has become the latest group to ban shark fin soup from banquets.

The Tung Wah Group of Hospitals said it had decided to stop serving what is considered one of the most prized Chinese delicacies over concern about the world's declining shark population.

Shark fin has now been replaced by bird's nest or other Chinese-style soups.

Tens of millions of sharks are killed each month by finning, the process by which the fins of the shark are sliced off and the creature is thrown back into the water to slowly bleed to death.

The Tung Wah group said it holds about 30 banquets a year for fundraising and charity galas, and with up to 35 tables on each occasion, shark fin soup can be a pricey dish because it typically costs up to 4,000 Hong Kong dollars (513 US dollars) per table.

Both Hong Kong Disneyland and the University of Hong Kong dropped shark fin soup from their menus in 2005, but the Hong Kong government has so far refused requests from environmentalists to scrap the dish from banquets for visiting dignitaries.

Sea Shepherd has been fighting the horrendous practices of longlining and shark finning for years. Our work was documented in 2002 by filmmaker Rob Stewart who joined a Sea Shepherd ship on campaign in the Galapagos and Cocos Islands to address overfishing, poaching, and shark finning. Captain Watson will be presenting Rob's film Sharkwater at the Telluride Mountain Film Festival on May 25th in Telluride, Colorado.