Home from the Sea. Home to the Trees

Sea Shepherd and Forest Rescue devised a plan to come to the rescue of Simon so this eco-warrior could be freed.

Simon came through the jail gate and was greeted with an enormous hug and a kiss from his partner Panda and you could tell, although quite skinny compared to usual from his hunger strike, he was ecstatic to be back on land, officially.

Simon stated that when he and the boys boarded off the Western Australian coast, they were almost struck by a humungous one meter by one meter chunk of ice that was thrown at them by the Shonan Maru No. 2 crew. You would think that with a $28 million dollar budget they would be more sophisticated than resorting to ice age weaponry. They did not resist the Japanese and were taken immediately to the communication room where they sat for some 24 hours of questioning before being allowed to lie on the floor with some blankets and get some sleep.

Then were then transferred into a two metre by two meter cabin with one single and one bunk bed and there were two guards in the room at all times. They were inside the cabin for six days straight and only allowed to go to the toilet and were not allowed outside the ship. They were also given clothing. In general Simon said they were treated well,.

Simon also felt that the Japanese were very impressed with the way the Forest Rescue men conducted themselves, in that they were calm and respectful towards their captors. 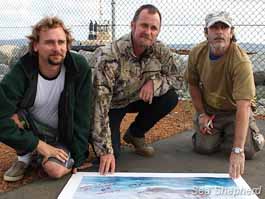 When asked if Simon and the boys would do it all again, they stated "in a heartbeat."

The Australian government still has not returned any of Sea Shepherd's phone calls and continues to attack Sea Shepherd over the taxpayer cost of returning these brave men for doing the government’s job. Sea Shepherd would like to re-iterate that on January 11, 2012, Sea Shepherd via Jeff Hansen called both the Minister for the Environment, Tony Burke’s office and the Attorney General's office, offering a solution that would be at no expense to the Australian tax payer. The solution given was to allow Sea Shepherd to handle the transfer. Also, if the Australian government had acted when the men were still in the contiguous zone off of Bunbury, Western Australia and not in international waters, the cost would have been far less as the customs vessel was close by at the time. No one seems to have an issue running to the aid of a stricken boat who is trying to break some round the world record, no tax expense is spared there. One would think that defending the magnificent whales that migrate past our coasts and play a vital role in the health of our oceans would be a far greater cause.

To put this in perspective, the Australian government spent millions rescuing a British sailor named Tony Bullimore who was attempting to set a world record during his transit of the Southern Ocean in 2007.

This incompetent sailor was rescued while attempting a world record at the cost of $7 million dollars and not once did the Australian government complain about the cost of the rescue. In fact this is what the Australian Maritime Safety Authority had to say in response:

"Either way, if it's the right or wrong thing to do, it's his choice."

Ms. Higgins said the authority would not hesitate to come to Mr Bullimore's aid should he require it.

"If there is an issue, an incident, or he gets himself into trouble and he's in our search and rescue region, then we will respond to that like we would with anybody else," she said.

Of course Mr. Bullimore was not trying to save endangered cockatoos or whales. He was not Australian and being British it is expected that Australia would spare no expense for his rescue.

Mr. Bullimore sold his story for one million pounds yet gave nothing back to Australia. In contrast Prime Minister Gillard stated that the whale defenders should be made to repay the Australian government for the expense of their recovery even though Sea Shepherd offered a no cost alternative plan for their recovery.

Forest Rescue's Simon, Glen and Geoffrey are very humbled by all the support they have received, especially the lengths Sea Shepherd, Forest Rescue, the Greens, via Senator Bob Brown, and all their supporters went to get them rescued.

They are very happy to hear that their action has made a significant difference in the defence of the great whales for Operation Divine Wind.