Harp Seals May Be Extinct in Two Decades

Harp Seals May Be Extinct in Two Decades 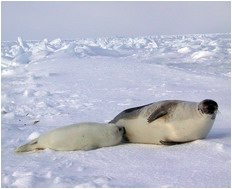 Sea Shepherd Conservation Society is a marine wildlife conservation organization, and the primary reason we oppose the slaughter of harp seals by Canada and Norway is that there is sufficient evidence that we should be very concerned about the survival of this species.

The Canadian government would have the public believe that the seal slaughter is exclusively an animal rights issue and not a conservation issue. It is both. Some groups legitimately focus on the humane concerns of sealing. Sea Shepherd is concerned about both the way the seals are killed and the impact of this excessive slaughter on the oceanic ecosystem and on the survival of the harp seal as a species.

According to the Canadian Department of Fisheries and Oceans (DFO) the harp seal populations are in excess of 5 million animals. Independent studies do not back up that figure and the actual population is unknown but most likely lies between a low of 2 million and a high of 4 million.

The problem is that the numbers are irrelevant. The passenger pigeon once numbered in excess of a billion individuals. The last one died in a zoo in 1914.

Canada's annual slaughter of wild populations of harp seals is the largest marine mammal slaughter in the world with an annual spring commercial quota of 325,000. The actual kill is much higher because the quota is exceeded every year. In addition, the Inuit sealers kill another 10,000 harp seals every summer. The Canadian lumpfish fishery takes an annual incidental kill of another 17,000 on average each year. Many thousands of others die in nets, traps, and are shot by ignorant fishermen.

The population of harp seals may be considered large by some special interest sectors, but some species, especially some marine species, require large populations for survival. Harp seal populations have already been severely diminished from the approximately twenty million plus of these seals prior to the European  introduction  of sealing on the East Coast of Canada in the late 17th Century.

But there is another more devastating threat to seal survival than the sealers. That threat is global warming. A combination of high kill quotas and diminishing ice could very well wipe out the harp seal within twenty years.

Dr. David Lavigne, one of the world's leading experts on harp seals and their behaviors recently said, ""The combination of a lack of ice and a seal hunt could result in the loss of almost all of this year's pups born in the Gulf and, possibly, on the Front, as well."

The Canadian government has consistently refused to consider diminishment of ice as a factor in setting their kill quotas.

"Every year more and more seal pups die from drowning and this very large number of losses is not factored into the quota setting process," said Captain Paul Watson, founder and president of Sea Shepherd. "The government of Canada appears to be deliberately, or incompetently, intent upon exterminating the harp seal."

The DFO are aware of the large kill and government reports reflect a loss of as many as one-quarter of pups born to poor ice conditions. The DFO report states that seal populations will deplete by more than 70 percent within the next 15 years. DFO scientists are aware of the threat but the government is doing absolutely nothing to address the threat.

"The Canadian government must act responsibly," said Captain Watson. "If there is no ice or only small patches of ice, there should be no seal hunt."

Even without a seal hunt, hundreds of thousands of seal pups will die in March 2007 because of lack of ice.

Warmer conditions will also bring disease to the seals like canine distemper and the deadly plague of brucellosis. The seals, in turn, could pass brucellosis onto polar bears, Narwhals, and Beluga whales.

Polar and sub-polar ecology is literally unraveling before our eyes.

"I have been going to the ice on the Labrador Front and in the Gulf since 1975, and I
have seen the conditions change dramatically in that time," said Captain Watson. "We simply don't see the ice as thick, the blizzards as bad, or the air as cold. What we see now are large puddles of water lying on the ice and we can navigate the floes much easier today. My logbooks tell the story."

The harp seal's Latin name is Pagophilus groenlandicus which means "the Ice Lover from Greenland." Harp seals never touch land. They are born on the ice and spend their entire life in the sea. If the ice disappears, the seals will disappear.

One Newfoundland sealer questioned about this said, "Well if the ice is disappearing, we may as well kill them all now, otherwise they will be wasted."

The reality is that the harp seal is an important part of the North Atlantic ecosystem and its disappearance will set off a chain effect that will impact hundreds of other species.
Sea Shepherd is appealing to the Canadian DFO to abolish the seal hunt. 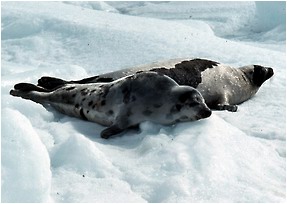 "We live in a different world now," said Captain Watson. "The very foundation of the harp seal's life is being literally melted away from under them. We need to maximize the number of seals in order to allow them to get a foothold in areas far north of Newfoundland. The choice will be between the Canadian government acting responsibly and extinction due to the ecological consequences of our industrial society."

Sea Shepherd is working towards a return to Eastern Canada to oppose the slaughter of seals. "It's really a question of resources. Can we raise the funds needed to turn our ships around from our campaign against illegal whaling in the Antarctic Whale Sanctuary and make our way back to the Northern Hemisphere to protect the seals? If we have the fuel to return from the Southern Oceans to the coast of Labrador, we will do it," said Captain Watson.