Although the Sea Shepherd's Steve Irwin is en route to the Mediterranean to defend bluefin tuna from poachers for Operation Blue Rage, and the Bob Barker is in Tasmania, we are now working to secure a third ship in Europe to bring to the Gulf to address this disaster.  Our crew will be fully trained in HazMat and rescue operations on land and sea, and we will be able to accommodate experts and equipment needed to search for, capture, and rescue oiled marine life in the Gulf.  We will work with BP, local fishermen, and the U.S. government to support their efforts and those of other approved personnel and nongovernment organizations.  We will need donations of fuel, supplies, dispersants, cleaning detergents, towels, blankets, and we need volunteer crew, especially volunteers with experience in rescuing and cleaning birds and animals contaminated with oil. (NOTE: anyone interested in donating supplies or services, please email: gulfrescue@seashepherd.org) 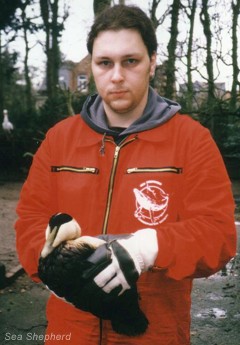 Sea Shepherd has a long history of helping with oil spill cleanup and marine rescue operations.  For example:  we supported the cleanup after the Exxon Valdez ran aground on Bligh Reef in Prince William Sound in Mar 1989 and spilled over 10 million gallons of crude oil.  Our Operation Oilstorm Y2K was initiated with the sinking of the oil tanker Erika in December 1999, which produced a slick that eventually covered 125 miles off the Breton Coast of France.  The rupture of the Petrobras Oil Col pipeline in Rio de Janeiro in January 2000 saw Sea Shepherd volunteers coordinating wildlife rescue efforts, and Sea Shepherd Brazil (ISSB) contracted with Petrobras to develop an oiled wildlife rescue plan.  In January 2001, Sea Shepherd's patrol boat Sirenian was the first vessel on the scene of the Jessica oil spill in the Galapagos, and our volunteers spent weeks rescuing and cleaning oil-soaked birds, seals, and marine iguanas.  Again in September 2005, the crew of the Sea Shepherd's Farley Mowat rescued and cleaned birds, iguanas, and other marine species, coordinated the shore-cleaning operations, recovered floating debris, and removed dangerous mooring lines around the wreck after a diesel spill in Academy Bay at Porto Ayora on Santa Cruz Island in the Galapagos.

Our ships and dedicated volunteers have accomplished amazing feats through the years, but this disaster in the Gulf needs more than we alone can give.  The Sea Shepherd Conservation Society is appealing for cooperation and assistance from additional nonprofit organizations, governments, corporations, and all concerned individuals.  While we will work with the U.S. Government and BP to support their efforts, we are also appealing to them for help with coordinating equipment, qualified personnel, and onshore facilities to complement our offshore work, and to help expedite appropriate clearances for us and other organizations who can bring unique and truly helpful expertise and equipment to help with these rescue efforts.

Sea Shepherd welcomes donations from the public which supports our “Gulf Rescue Campaign” to rescue and protect marine wildlife and habitats. Charity Navigator has recognized Sea Shepherd with a 4-star rating indicating that it is amongst the best nonprofits when it comes to responsible fiscal management and effective use of funds for campaigns.