"Sea Shepherd will never retreat and we will never surrender until the outlaw whalers are driven out of the Southern Ocean Whale Sanctuary for good," said Executive Director Kim McCoy.

"They can send the entire Japanese Navy down to the Southern Ocean if they like, but Sea Shepherd and the crew of the Steve Irwin will not be intimidated by this kind of brutal military thuggery. When we say we put our lives on the line to defend the whales, we mean it. It's not just a slogan for us," said Captain Watson. "I have not seen a whale die since I left Greenpeace in 1977 and I have no intention of seeing a whale die this year. They don't kill whales when we show up and they won't kill whales when we arrive again this year. They will have to sink us first." 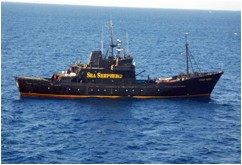