Greenpeace is saying "Goodbye to Joey" with a bullet.

The one consistent thing these days about the Greenpeace Foundation is its inconsistency. Back in 1986, Greenpeace produced a film about the commercial slaughter of the kangaroos in Australia. The film was called Goodbye to Joey, and it denounced the wholesale slaughter of kangaroos. According to Australian Greenpeace spokesperson Trevor Daley, Greenpeace opposed the commercial trade of kangaroo products on ecological and moral grounds and stated that, "on a purely moral basis, we find it nauseating." 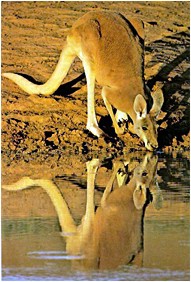 That was then, but today Greenpeace is actually calling for the commercial slaughter of millions of kangaroos as a solution to . . . global warming! Now Greenpeace energy campaigner Mark Wakeham is urging Aussies to eat kangaroo to help reduce land clearing and the release of methane gas. "It is one of the lifestyle changes we can make," Mr. Wakeham said. "Changing our meat consumption habits is a small way to make an impact." Obviously, Mr. Wakeham is not a vegetarian, which of course is the more positive way of changing meat consumption habits.

The proposal to commercially slaughter kangaroos is contained in a report, Paths to a Low-Carbon Future, commissioned and released by Greenpeace. Roughly three million kangaroos are killed and commercially sold for meat each year. They are shot between the eyes at night with high-powered guns. Greenpeace wishes to see this number doubled. Australians eat only about a third of the 30 million kilograms of 'roo meat produced annually. This "delicacy" is exported to dozens of countries and is most popular in Germany, France, and Belgium.

The Australian kangaroo population has been cut in half over the past five years because of excessive drought. A major commercial slaughter is hardly going to be beneficial to this diminished population. The Greenpeace report by Dr. Mark Diesendorf, from the University of New South Wales, states that greenhouse gas emissions need to be slashed by at least a third by 2020 in order to avoid a climate change catastrophe. One of his recommendations is reducing beef consumption and increasing kangaroo meat production. "There's a small sub-set of environmentalists who see the kangaroo as a cuddly animal which should be left alone. They are entitled to their view, but more and more people are moving towards eating it,'' said Dr. Diesendorf.

What is Greenpeace thinking? Or are they thinking at all? Greenpeace is actually calling for a massive slaughter of a wildlife species for commercial purposes. It is bad enough that Greenpeace no longer opposes the mass slaughter of harp seals in Canada. It is tragic that Greenpeace continues to support the trophy hunting of polar bears in Alaska and Northern Canada. But to openly support the largest massacre of any wildlife species on the planet is going beyond the bounds of acceptability. Has Greenpeace received a large contribution from the kangaroo meat industry? What would possess them to issue a call for a kangaroo slaughter?

Sea Shepherd Conservation Society Founder and President Captain Paul Watson was also a co-founder of Greenpeace. "I feel a little like Dr. Frankenstein, having helped to create this green mean monster. There can be no justification for this insane proposal." Al Johnson, who founded Greenpeace USA and was a member of the film crew in 1984 that made Goodbye to Joey was shocked when he heard this proposal. "This is inexcusable. How can we produce a passionate film denouncing the horrific kangaroo slaughter and then advocate the mass slaughter of kangaroos a few years later?"

"It is interesting that Dr. Diesendorf does not mention vegetarianism as a solution to global warming, nor does he mention the need to reduce human populations or to curb our excessive consumption of fish," said Captain Watson. "Instead, he has chosen to become Dr. Death for the 'roos and is advocating the mass slaughter of a wild native animal that has been a positive member of the Australian ecosystem for tens of thousands of years. And he dismisses those who disagree with him as a 'small subset of environmentalists.' Dr. Diesendorf is going to discover that opposition to this Auschwitz approach to solving climate change through mass killing will be opposed by a great many people."

Please contact Dr. Diesendorf and voice your opposition to the mass commercial slaughter of kangaroos for dinner. Tell Greenpeace that far from being a member of a "small sub-set," you are a true environmentalist, and it may choose to push this plan, but not in your name or the name of environmentalism.