Great Britain to Join the "Save the Seals" Camp

Great Britain to Join the "Save the Seals" Camp 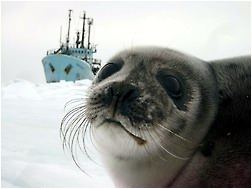 For those of us who wish to stop the obscene, cruel, and ecologically-destructive slaughter of seals on the East coast of Canada, we have just acquired a powerful new ally.

The British government is preparing to join Greenland, Denmark, and Italy in the campaign to ban seal products from Canada.

The London Times carried the story on February 17 under the heading "Britain Ready to Risk Rift on Seal Clubbing."

Sea Shepherd Conservation Society welcomes the support of Britain. The late British Labour Minister and member of Parliament Tony Banks was an ardent supporter of the seals and his party is rallying around his last wish to take action to end the horrific slaughter of seals in Canada each year.

The Canadian government has not yet set a quota or set an opening date for the seal slaughter. The seals are also threatened this year by the effects of global warming which has left the Gulf of St. Lawrence free of ice. The harp seals are dependent upon ice to give birth to their pups.

MINISTERS are poised to risk a diplomatic rift with Canada by backing a ban on the import of seal products for fashion accessories.

Jack Straw, the Foreign Secretary, and Alan Johnson, the Trade Secretary, are understood to be sympathetic to calls for a ban because of international outrage over the slaughter of baby seals in Newfoundland.

Seal products are also used in the manufacture of sporrans. The United States has already banned the trade with Canada. The Canadian seal hunt, due to resume in six weeks, is the largest marine mammal cull in the world. The Government's readiness to act was signalled by Ian Pearson, the Trade Minister, in a debate this week. He said: "Seal-clubbing does the reputation of Canadians no good at all."

An intensive lobbying campaign is under way by MPs to persuade the Treasury and the Environment Department that a ban should be introduced. More than 315,000 seals were killed in March and April last year. An independent veterinary study of seal skulls found that more than 40 per cent had minimal or no fractures, suggesting that the animals were conscious when skinned. Kill levels today are twice as high as in the 1960s.