Three hundred residents of Santa Cruz staged a counter protest to striking fishermen on Friday, June 4. They marched to the gate of the National Park where they were halted by a line of Police and Marines.

Behind the Marines fishermen yelled and brandished clubs and set automobile tires ablaze.

Sea Shepherd cameraman Ross Wursthorne was struck in the groin by a papaya as he attempted to film the fishermen who kept to the background as their wives stood on the front lines hurtling stones.

The residents yelled slogans like "we support the National Park" and called for Governor Alexandra Cedenio, and Ecuador President, Lucio Gutiérrez, to uphold the law.

Tourists staying at the Red Mangrove Hotel and the Galapagos Hotel were refused entry to their accommodations by the fishermen. Residents of the Charles Darwin Research Center were told they could not return to their homes. When one tourist complained to the police, the officer shrugged his shoulders and said that he could do nothing.

After an hour of strikers and counter strikers staring each other down, the police ordered the counter strikers to disperse, saying that there were Marines in the Park and they were beginning to move the fishermen out. An hour later, the fishermen were burning more tires and the police had vanished from the streets. A truckload of beer and supplies entered the Park unimpeded by police and the fishermen settled in to celebrate their possession of the Park.

The police reported that they had indeed entered the Park and that they were in position to disperse the rioting fishermen when they received an order from the President of Ecuador to stand down.

Forty Eight hours after the strike began, we saw fishermen in control of the National Park headquarters on Santa Cruz Island, the Park offices on Isabela and San Cristobal Islands and the tourist center on Espanola. All Park employees have been forced out of the parks and the delicate tortoise breeding centers on Isabela and Santa Cruz are threatened by fishermen promising to slaughter the young and old tortoises because they are the symbol for conservation on the islands.

Six members of the Sea Shepherd crew of the Farley Mowat remain on Isabela Island, unable to return to the ship because fishermen have closed the harbor and are refusing to allow anyone to embark or disembark. 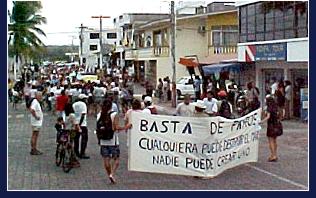 Captain Paul Watson was in the crowd of counter strikers, standing alongside former National Park director, Eliecer Cruz, and members of groups like WildAid and World Wildlife Fund.

"Eliecer was fantastic," said Captain Watson. "He had a bullhorn and he was rallying the people of Galapagos to demand that law and order be restored and that the National Park offices and the tortoises be protected. It was amazing and frustrating to see a line of police blocking citizens from defending the Park, yet the same police had stood aside to allow the fishermen to seize the Park."

The Sea Shepherd ship Farley Mowat was scheduled to depart from the Galapagos today for a three week patrol for poachers. The ship could not sail because six Sea Shepherd crew remain on Isabela and the ship has been unable to refuel due to the chaos caused by the rioting fishermen. 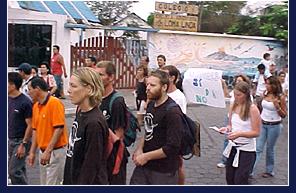 "The majority of people in these islands are employed by the National Park or by the tourist industry." reports Captain Watson. "There are only 1200 fishermen in a population of 25,000 yet this minority has intimidated the police, the military, the government and the rest of the population. People cannot work and the entire tourist industry is being threatened by this mob because they have realized that in Ecuador, violence is a tactic that works against a government that has no political or moral initiative to protect this magnificent World Heritage site. The fishermen rule in the Galapagos and the government and the authorities have been exposed as embarrassingly ineffective."

The Sea Shepherd Conservation Society is asking that people write, fax, or e-mail the Ecuadorian government through the embassies in their countries and demand that the government stand up to the mob of violent thugs terrorizing the Galapagos.