Unfortunately their safety was heavily compromised when humans started coming to the Galapagos Islands. First pirates and later whalers found out that tortoises were ideal to serve as food source on their long ocean voyages. They were easy to catch, contained lots of meat and could be kept, without having to give them water, for months on end. The whalers often kept them upside down and parts were cut off while the animals were still alive. Not only was this a horrible act for the animals involved, one you could compare to shark finning, the vast numbers of tortoises that were taken from the islands also put great stress on the various populations.

In about a century’s time, so many tortoises were slaughtered that some of the populations became extinct (Floreana genus) and others seriously endangered.

A further threat to the tortoises was yet another human intervention: the introduction of goats on the islands. The pirates and whalers introduced the goats (as well as pigs, cows and other animals) so they could breed and become a source of food for future visits to the islands.  Unfortunately the goats ate away the vegetation leaving many of the tortoises that remained, to starve to death. 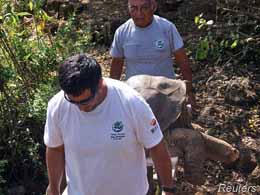 Lonesome George being carried by park workers.
Photo: ReutersOne of these was of course the Pinta genus with only one animal, Lonesome George, surviving the massacre and the lack of vegetation.

George was discovered in the early seventies by the Galapagos National Park Service (GNPS) and taken to Santa Cruz Island to enter the breeding program of the Park Service. Over the years this breeding program has proven to be invaluable as several species have been brought back from near extinction and are now enjoying healthy numbers.

For George, a breeding program was developed to have him mate with some females from other islands (Isabela and Espanola), species that are genetically close to the Pinta Genus.

Being a tortoise, George took his sweet time before he finally became interested in the females and several eggs were produced. Unfortunately, as is often with hybrids, the eggs proved to be infertile and no offspring came from them. Still hopes were high that eventually these attempts would be successful, as George would more and more become the symbol of conservation efforts both in the Galapagos and worldwide.

But, despite the efforts of so many involved, we have now lost this battle to undo what our ancestors have destroyed. We have to add yet another species to the ever faster growing list of extinct animals. And for most of these other species, very little is done to save them. Many of them, often out of sight, out of mind, quietly slip into oblivion, leaving this planet emptier every day.

I can only hope George will continue to be an icon for our conservation efforts, and, as such his death should be considered a wake up call. We need to act now or soon we will see Atlantic blue fin tuna, all the great apes, rhinos and elephants, all species of great cats as well as all shark species, joining Lonesome George in becoming nothing more but a memory in people’s minds.

Goodbye George, we the people of Galapagos will miss you dearly.