Governor Alexandra Cedenio has the power to stop mob violence in the Galapagos. She has refused.

On June 3, angry fishermen stormed the offices and headquarters of the Galapagos National Park and the Darwin Research Center on Santa Cruz Island. Eighty to one hundred fishermen armed with clubs, lead pipes and Molotov Cocktails stormed through the gates of the Park.

On Isabela Island, hundreds of fishermen seized the National Park offices in Villamil and the tortoise breeding station. Rogelio Guaycha, President of the Union of Fishing Cooperatives of Galapagos, announced on the radio that he has sent fishing boats out to prevent passengers from tour boats from disembarking on the island. The fishermen have officially closed the harbor. On Espanola Island, fishermen illegally seized the visitor's center and turned back tourists.

Paola Diaz, the Communications director for the Darwin Research Center reported that a fisherman tossed a Molotov cocktail onto the street and the flames missed her by inches. The mob smashed a police car window as they noisily made their way to the National Parks office and occupied the visitor information building.

Captain Paul Watson led crewmembers Alex Cornelissen, Jordan de Vaan, and Emily Hunter to the Park where they landed at the park jetty and made their way to the Station. Although they were wearing Sea Shepherd crew shirts, the fishermen were taken unaware and did not have time to react before the crew reached the rangers and the Park staff. They were joined there by crewmembers Jared Rubin and Ross Wursthorne armed with video and digital cameras.

The angry crowd of fishermen screamed slogans including the absurd "dinero vivo" or "money is life." This is their reaction to the slogan of the Galapagos year of the shark which is "tiburon vivo" or "sharks are life". The fishermen were brandishing Molotov cocktails and pounding wooden clubs and lead pipes together to threaten the rangers and staff.

They were also loudly demanding the resignation of Galapagos National Park director Edwin Naula and Marine Reserve Chief Fernando Ortiz. Their complaint was that both Naula and Ortiz should be ousted for insisting on the enforcement of Park regulations.

There were about thirty well-armed police and marines present but they only watched. They could have easily dispersed the fishermen but they said that the Governor had not given the order to do so.

Nor did she. At 7:00 P.M. the Minister of the Environment ordered the staff of the Park to vacate the buildings leaving the premises in the hands of the mob. 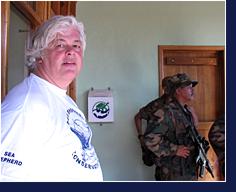 Said Captain Paul Watson, "I have never seen a mob armed with Molotov cocktails and threatening peoples lives be tolerated like this mob is being tolerated. They are openly laughing at the police and the military and the soldiers, and the police are visibly embarrassed at being prevented from doing their job of maintaining law and order in the province."

Governor Alexandra Cedenio lives in the capital of San Cristobal and she is an owner/operator of a commercial fishing boat. She has made it quite clear where her sympathies lie. She has openly denied the rule of law and her actions speak clearly to the fact that she is condoning mob violence.

The Sea Cucumber fishery was due to open on May 31st with a quota of four million. The National Park had warned that any quota would be a threat to the species and to the Ga lapagos eco-system. The fishermen rioted and the government caved in to their demands and allocated a quota. The quota came with the provision that fishing off Fernandina Island would remain closed, along with part of the Bolivar Channel in recognition of the depletion of the resource.

Having gotten their way, and realizing that violence works, the fishermen have decided to strike again, this time demanding unrestricted exploitation. They want the Fernandina and Bolivar sectors open, and they want an end to inspection and monitoring of the catch.

The fishing season is officially open, but no fishing is being carried out as the fishermen take their demands to the streets and occupy Park property with the insistence that the government grant them these impossible demands.

The Galapagos National Park and the Galapagos National Park Marine Reserve are both United Nations World Heritage Sites. The people of the world have a responsibility to protect this unique eco-system. The Sea Shepherd Conservation Society is asking that people contact the Ecuadorian government through respective embassies or contact the President of Ecuador with a demand that Governor Alexandra Cedenio be asked to resign for conflict of interest and for refusing to maintain the rule of law in the Galapagos province.

The Sea Shepherd Conservation Society has six crewmembers from the Farley Mowat on Isabela Island where they are being prevented from departing by the mob of fishermen. The Farley Mowat must depart from the Galapagos by June 6th as stipulated in our entrance agreement, yet the ship cannot depart without her crew. Captain Paul Watson has demanded of the authorities that his crew be allowed to leave from Isabela to rejoin the Farley Mowat.

Captain Paul Watson and the crew that was with him at the National Park headquarters on Santa Cruz departed when the Minister of Fisheries ordered all Park personnel, wardens and volunteers to depart, leaving the offices in the hands of the mob.

The Sea Shepherd crew were booed and jeered as they left the Park with the rangers and escorted by Ecuadorian marines.

"My crew and I did not wish to leave. We were ready to defend the offices of the National Park. But we agreed to follow the orders of the Director of the National Park Edwin Naula, and when Marine Enforcement Chief Pablo Salas asked us to leave with his staff, we could not refuse. Our objective has always been to cooperate and work with the National Park, and we will not refuse their orders. However, it was painful to surrender to mob rule and in my opinion, the Governor of the Galapagos, Alexandra Cedenio, is a disgrace to her office and she should resign because she has a blatant conflict of interest."

The community of Puerto Ayora is fighting back. The rangers, people employed in the tourist sector, staff and volunteers of the National Park and the Darwin Research Center, Sea Shepherd crew and school children have organized a counter protest for 5:00 P.M. on Friday June 4.


The public has been receiving flyers all morning stating:

Residents of Galapagos
Unite in a March
Unite in indignation, Stop the strike! Stop Vandalism!
We want to live in peace! We want to work! We demand security for our citizens
and we demand that the laws be respected that guarantee our future, the future of
our native environment and society.

The Sea Shepherd crew will march and we will continue to stand for those in the majority on these islands who have chosen to defend and protect the Park against those few who have consistently gotten their demands through threats and violence.

There are only about 1200 fishermen on the Galapagos and many times more people employed by the Park and the tourist sector. The demands of the fishermen will destroy tourism in the National Park and this is a serious threat to the security of the majority of the population.