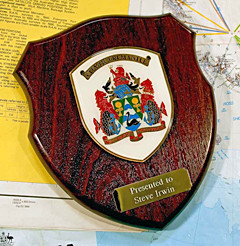 Mayor Brad Pettitt has continued the support of Fremantle City Hall for Sea Shepherd Conservation Society that we have enjoyed for years under former Mayor Peter Tagliaferri. He presented the Steve Irwin with a plaque of the Fremantle Coat of Arms and the flag of Fremantle with a request that we fly the city’s colors in the Southern Ocean.

In 2006, Peter Tagliaferi presented the flag and the Coat of Arms to Captain Alex Cornelissen on the Farley Mowat after the Farley Mowat docked in Fremantle fresh from their heroic escape from Cape Town, South Africa. Stripped of her Canadian registry and flying only the Sea Shepherd Jolly Roger, the Farley Mowat was a genuine pirate ship when she arrived to a hero’s welcome in Fremantle.

The December 2nd event raised $20,000 for the Sea Shepherd campaign for the whales of the Southern Ocean Whale Sanctuary.

The Perth and Fremantle Chapters of the Sea Shepherd Conservation Society have been the strongest support group for Sea Shepherd in Australia for years. The Captain and the crew of the Steve Irwin are grateful for the support of the City of Fremantle and Mayor Brad Pettitt for hosting the event, to Dr. Richard Walley for the Welcome to Country, to Aiden Varro for the music, to Graphic designer Sharon Wong for designing the promotional leaflets and to all the Fremantle supporting businesses for the donations of goods and services for the Silent Auction. 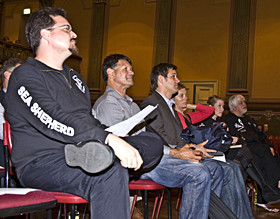 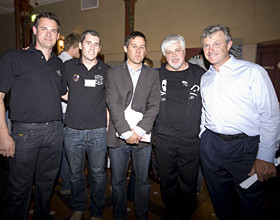 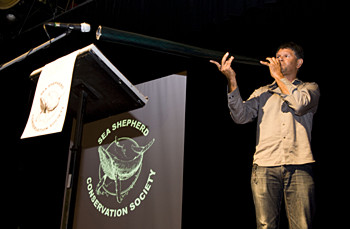 Sea Shepherd would like to gratefully acknowledge the following sponsors:

And the Sea Shepherd Conservation Society would also like to express our gratitude to the following volunteers for making this event possible.