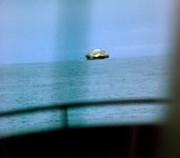 The Bob Barker is currently on the tail of the Nisshin Maru and two harpoon ships, where it will attempt to block the slipway of the factory ship until the Steve Irwin arrives.