Out of Control Poaching on Cocos Island

Sea Shepherd Conservation Societys vessel, the Farley Mowat left the waters of Cocos Island late Saturday afternoon on May 18. They also left behind hundreds of miles of longlines laid by poachers, who are devastating the Cocos Island area. There is out of control illegal fishing going on around the Cocos Island and in the waters of Costa Rica by large Taiwanese fishing vessels. These huge ships, owned by large export companies, are devastating the Costa Rican waters. 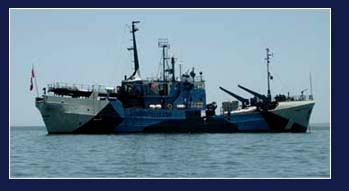 The Farley Mowat returned to Puntarenas on May 20th, with the hopes and understanding that Costa Rican court officials had dropped their feud against Paul Watson and Sea Shepherd for snagging the poaching vessel, the Varadero I.

Captain Watson, however, was advised by his attorney to leave Puntarenas immediately, as the courts were going to arrest him. There have been no formal charges or a formal case filed against Paul or Sea Shepherd. The court officials manipulating this case since the time we entered Costa Rican waters, obtained permission by a judge to arrest Captain Watson and "throw him in jail until they could decide what to do with him."

Captain Watson departed on the Farley Mowat Monday, May 20th.

Sea Shepherd has been working with the Cocos Island park rangers for the last couple of weeks assisting them on patrols and cleaning tons of trash off the Island. The Farley Mowat hauled in almost as much trash off Cocos Island, as was taken off Mt. Everest, in 1996. The crew was prohibited from directly intervening with the poachers, however, because of the corrupted legalities with the courts.

Sea Shepherd's mission to Costa Rica has been thwarted by fishy politics since the beginning of the campaign. Our conservation activities upset the illegal practices of the fishing industry: we intervened with the Varadero I poaching off the coast of Guatemala, our crew uncovered an illegal shark finning operation in Puntarenas, and we have interceded with poachers around Cocos Island while assisting the Cocos Island Park rangers.

Our conservation activities have also upset members of the judicial court system who wish to protect the poachers. We have exposed corruption in the judicial system, with four different prosecutors and three different judges interfering with the original decision to dismiss all fabricated charges against Paul and Sea Shepherd after viewing footage from the Varadero I incident.

Captain Watson reported Taiwanese longliners illegally laying over 20 miles of longline around the Cocos Island. He also said there are hundreds of illegal fishing boats destroying the wildlife and the ecosystems of Cocos Island.

Cocos Island is a World Heritage Site that Sea Shepherd Conservation Society and Cocos Island Foundation have joined together to preserve and protect. Sea Shepherd brought three generators, a radar system, and many willing volunteers to Cocos Island in order to facilitate the preservation of this beautiful Island.

Costa Rica invited Sea Shepherd to sign an Agreement with them April 30, 2002 giving Sea Shepherd the authority to patrol the Cocos Island and intervene with any illegal fishing activities. The Agreement has not yet been signed.

The Cocos Island Foundation and many government officials, including the new President of Costa Rica, Abel Pacheco; the Minister of Environment & Energy, Carlos Manuel Rodriguez; the Minister of Public Security, Rogelio Ramos Martinez; Col. Claudio Pacheco, Director of the Costa Rican Coast Guard; and William Munoz, Executive Director of the Cocos Island Foundation are working very hard to rectify the situation for Captain Watson and Sea Shepherd. All parties are working toward having an Agreement signed very soon.

You can show your support by sending this LETTER to the following individuals:
(cut and paste the letter into each email)

The World Heritage Site is one of the most beautiful places in the world, and is being ravished by poachers - for sharks fins and shark cartilage. 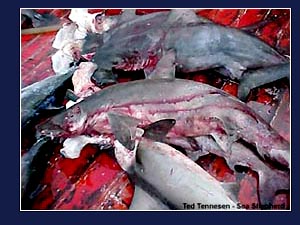 Unfortunately there will be no change without controversy.

The Sea Shepherd Conservation Society wants to protect Coco Island and wants to desperately defend the marine species threatened by poaching - but this will not be possible in a situation where the courts, the police, and the coast guard are more concerned about protecting the "rights" of poachers than that of their victims.