The case is the first public civil action suit in Brazil filed against a fishing company.

April 29th, Porto Alegre, Brazil - The Federal 4th District Court upheld today a previous sentence that found guilty fishing company Pescados Amaral on 1st degree for illegal drag-net fishing practices along the southern state's coast and ordered it to pay damages equivalent to $220 thousand dollars. The civil action suit was filed by Sea Shepherd Brazil and this ruling sets another important precedent in the fight for marine conservation in the country. This latest decision comes only 2 weeks after the same Federal Court ruled in Sea Shepherd's favor in a different case against illegal fishing, sentencing a fishing boat owner to pay over half a million dollars in damages. Pescados Amaral can still appeal this ruling, but only to Brazil's Supreme Court, located in the country's capitol of Brasília.

The Federal Court also sentenced Pescados Amaral to pay a fine equivalent to $73 thousand dollars each time the company is caught practicing illegal fishing or is found inside prohibited areas. 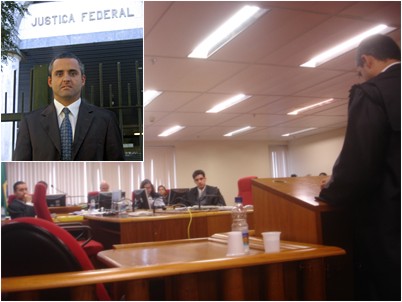 Sea Shepherd's Cristiano Pacheco, our one man army in court.

The civil action suit against Pescados Amaral was based on damages caused to the environment in August of 2000 by their fishing boats: Amaral IX and Amaral X. In a direct action campaign called "Operation X", Sea Shepherd Brazil mobilized the local community and officers of the Military Brigade (PATRAM, which stands for environmental patrol unit) and gave chase by air, land and sea to fishing boats illegally operating 3 nautical miles from the coastline. Upon boarding the vessels, PATRAM officers inspected the fishing boats nets, while Sea Shepherd volunteers painted the hull of the boats with a red X. The idea behind painting the hulls was to aid government authorities responsible for enforcing fishing regulations in easily identifying and fining the boats upon their return to port.

"In Brazil, Ibama and the Navy are responsible for enforcing fishing regulations at sea, but they didn't want to cooperate with us in this occasion. The Military Brigade (PATRAM) was happy to come along but they don't have any boats, so we gave them a ride on ours," say Sea Shepherd Brazil's Director Daniel Vairo.

"Since Ibama and the Navy were absent from the operation, the case was built around evidence collected by Sea Shepherd volunteers and the PATRAM officer's testimonies, their official reports, pictures and videos of the infractions. This is an old and grave problem in this southern state and Sea Shepherd was tired of the lack of action by government agencies. Predatory drag-net fishing is an archaic practice, responsible for the destruction of marine biodiversity and ecosystems, the demise of small traditional fishing families and the death of surfers that drown each year caught in the industry's ghost nets," says Cristiano Pacheco, Sea Shepherd Brazil's Legal Coordinator.

After nearly 6 years of inaction by the State Justice, the civil suit case was then sent in 2006 to the Federal Justice. After being found guilty by the Federal Environmental Court of Porto Alegre in January of 2007, the company appealed to the Federal 4th District Court. The Federal Chief Judge Luiz Carlos de Castro Lugon, analyzed the case and decided to uphold the previous sentence. 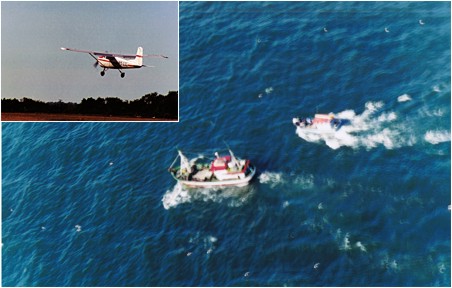 The magistrate considered "completely ludicrous", the defendant's allegation that Sea Shepherd had not presented enough evidence that proved their vessels had broken the law. Lugon highlighted that the previous sentence had "examined thoroughly all evidence" and that Pescados Amaral was a repeat offender, having already been fined twice by Ibama back in 1999.

"The fines are supposed to go to the State Environmental Fund and used by federal regulators for purposes of environmental preservation and education. We plan on petitioning the judge and asking for some of the funds to go towards the purchase of a Sea Shepherd patrol boat to assist local authorities in enforcing fishing regulations," says Daniel Vairo. 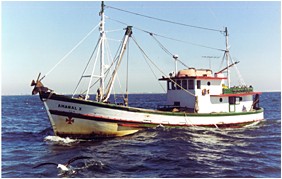 The chief judge mentioned in his decision the technical arguments presented by Sea Shepherd Brazil to explain the affects caused by drag-net fishing in the marine environment. According to the arguments, the practice is considered one of the most serious disturbances to benthonic communities (such as sponges, mollusks and crustaceans, organisms that live in close association to sediment in marine ecosystems). Those communities represent important links in the food chain and drag-net fishing can directly affect species of fish and shrimp, whose populations can also suffer grave alterations.

Sea Shepherd argued that the method in which drag-net fishing is carried out inherently causes environmental damage, since it is impossible to drag the ocean floor without causing damage to marine ecosystems. Even if there were no dead animals on the net at the time PATRAM inspected the nets, there had inherently been damage done to the environment. The burden of proof was therefore with the defendant, who had to prove beyond reasonable doubt that his method of drag-net fishing wasn't causing any damage to the environment.

The public civil action suit filed by Sea Shepherd Brazil was based on the Federal Constitution, article 225, which empowers citizens to become involved in safeguarding the environment.