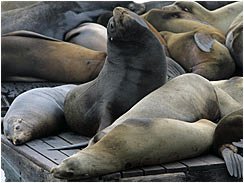 Last week, 24-year-old fisherman Hai Nguyen, stabbed a female sea lion in the heart with a steak knife on a Newport, California dock. The animal was so severely wounded that she had to be euthanized. Fortunately, this incident had witnesses, and Nguyen was quickly arrested and held on felony animal cruelty charges, pending $20,000 bail. He is also under investigation by federal authorities for violations of the Marine Mammal Protection Act (MMPA). Nguyen faces a fine of up to $25,000 and up to a year in prison if convicted on the animal cruelty charge. A federal conviction under the MMPA could add $12,000 in civil penalties, criminal fines of up to $20,000, and additional jail time.

The Sea Shepherd Conservation Society (SSCS) wants to see Nguyen prosecuted to the fullest extent of the law. "A clear message must be sent that malicious violence to marine wildlife cannot and will not be tolerated in this nation," said Captain Paul Watson, founder and president of SSCS.

Defenders of the fisherman are claiming that it is racist for Nguyen to be charged. They argue that Nguyen was defending his right to fish without harassment by sea lions, who sometimes snatch fish from the hooks of anglers. "Please," said Captain Watson. "This is the United States, and we are supposed to be equal here.  That means it does not matter what the hell your race is, you don't commit felony assaults on animals. This behavior has no place in a civilized society, and the prosecution must be blind to the race and color of the perpetrator of this vicious act."

Other defenders of the fishermen said that sea lions and humans have been at odds in recent years along the coast, particularly in Newport Beach, because the animals wreck docks, make noise at night, and sometimes leave strong odors. Of course, humans destroy sea lion habitat, drive them from the beaches, kill them in nets, make more noise on the water than any other animal, and create more of a stench within marine eco-systems than any sea mammal. Such an accusation is arrogant, ignorant, and indicative of the prevailing attitudes that are rapidly eroding away nature.

Please send a letter or make a telephone call to Orange County District Attorney Tony Rackauckas, stating that you would like to see Hai Nguyen prosecuted to the fullest extent of the law under felony animal cruelty charges.