I could not care less how I was personally ridiculed, lampooned, and insulted. Hell, being ridiculed, lampooned and insulted on South Park is a declaration to the world that Sea Shepherd and Whale Wars are effective and have cracked through to the other side of the media culture curtain. Yes sir, we are now on the same carnival sitting duck gallery as my old buddy Sean Penn, and Nicole Kidman’s ex-husband Tom Cruise and the Scientologists.

I get called insulting names all the time by irrelevant trolls on the internet and it’s never bothered me because I’ve always felt that no one makes any social reform progress in this world without pissing off a great many people, and the more people you piss off, the more progress you make. But it’s one thing to piss off the hoopleheads and quite another to piss off the elite in the government and the media. Pissing off the Fox Network is a piece of cake (I’ve done that a few times), but to attract the attention of Comedy Central, that’s a step up in the media food chain.

This is especially true for environmentalists and conservationists. We’re in the business of really pissing people off and I could fill a book with the letters and e-mails I’ve received threatening to kill me or just expressing their hysterical hatred for me. The pages are practically soggy from the foam dripping from their angry, drooling mouths.

And I love it. I do so love making people angry, making them think and confronting them with the ecological realities of what they are doing to this Earth and their diminishment of the wondrous diversity of species that share this planet with us.

Like Parker and Stone, I am an unashamed misanthrope and that pretty much makes me immune to criticism and ridicule.

This week the Kihansi spray toad was declared extinct. There are 17,000 species that we know of that are rapidly slipping toward oblivion. We will lose more species of plants and animals between 2000 and 2065 than the planet has lost in the last 65 million years and all because of the ecological irresponsibility of one species, my very own Homo sapien arrogantus ignoramus. So in light of this biological holocaust, I get slightly amused when anyone suggests that being ridiculed by South Park is cause for personal concern.

In fact, I think that the characters in South Park so accurately reflect the apathy and stupidity of humanity that it is downright frightening to ponder on just how close to reality the show actually is.

This particular episode of South Park titled “Whale Whores” slams the Japanese culture, but it also takes shots at American culture. It smacks down vegans and meat eaters alike, it ridicules Larry King, myself and my crew, unleashes Godzilla on the cowardly whalers, sniggers at the Hiroshima bombing, massacres the Miami Dolphins, firebombs and sinks the Nisshin Maru, kamikazes the Steve Irwin, kills off my crew, wipes out the whalers, mocks television, bitch slaps the crew of the Deadliest Catch, and does all this in a mere twenty minutes of way over the top violence, racism, sexism, and every kind of politically correct ism there is in an perverse orgy of slapstick humor supporting a ridiculously silly plotline that these pathetically successful evil geniuses manage to pull off in their particularly nasty minded manner.

In other words- it was frigging great! 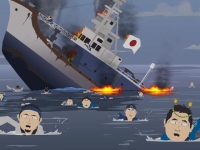 And most importantly right there on the side of our ship in big bold cartoon characters was “www.Seashepherd.org” and they actually spelt it right. Now how in hell could I complain about that?

The audience receiving the message of the horrific and illegal slaughter of the whales and dolphins was boosted tremendously, and people who had never heard of Sea Shepherd or even Whale Wars, were introduced to us, and the issue, and that can all be summed up by saying it was one mother of a media success.

Someone told me that they thought it was overly negative that I was depicted and slandered as lying about the whales, about being shot blah, blah, blah… Of course the media culture is one big super lie so that does not bother me. The truth is the truth, but unfortunately the truth does not hold much currency these days. Lies sell and because of this, sorting out lies from truth has become impossible. Ask any politician or corporation.

Did I lie about being shot by the Japanese? No, but I can’t prove it, and if I can’t prove it then people are free to speculate all they wish. It would have helped if the Australian Federal police had done a forensic analysis of the bullet but they refused to look at it, using the excuse that they did not have jurisdiction. The Dutch where our ship is flagged did not want to see it. The Americans and the Canadians (for which I hold passports) did not want to see it. In the end I dropped it into the hands of William Petersen who plays Gil Grissom on CSI Las Vegas. He looked at it and his “expert” opinion was “yep, it looks like a bullet.” So, that’s good enough for me. Besides I know the truth and that’s all that’s important to me. I could not give a flying fig what anyone else thinks.

So if Stan wishes to call me a liar, then Stan can take a number and join the line of the multitudes who have already done so. Besides in a world where millions of people still believe that global warming is a lie, that Barack Obama does not have a birth certificate, and world leaders swear they have personal conversations with God, being called a liar carries very little weight. When you think of it, we live in a culture of lies and one person’s truth is simply another person’s lie. Sarah Palin just wrote a book full of lies and it’s a national best seller.

Are we “vegan pussies” pretending to be pirates, as the show says? It was the Japanese and Norwegians who first called us pirates, not us, but I’d rather be depicted as a “vegan pussy” than a deranged killer. It’s easy for Captain Stan to kill off the whalers in fantasyland but for those of us caught up in reality, we have to have a different set of rules and our first concern is that no one gets hurt and the second is that we stay out of jail. Unlike Stan and the boys, we can’t write our way out of the hoosegow.

Our campaigns to the Southern Ocean have been and are being effective. We have managed to cut kill quotas nearly in half, and we have prevented the taking of 90% of the Fin whale quota. We have cost the Japanese whaling fleet loss profits for three years running and we have publicized the illegal slaughter of whales and dolphins by Japanese whalers globally and much to the embarrassment of the Japanese government. We know what we’ve achieved and with that knowledge we can sit back and laugh at ourselves and at the whalers and enjoy the parody.

Whale Wars has made us stronger, and as I predicted before the airing of South Park, Stan’s temporary fantasy takeover of my ship has brought us even more support.

As we prepare to return to the Southern Ocean for the sixth campaign to oppose the Japanese whalers, we have made sure to pack a DVD of South Park for the amusement of the crew and I’m thinking we should catapult a few copies onto the deck of the Japanese whaling boats to lower their morale.

I can’t help thinking just how funny it is that Dutch board member Alex Cornelissen, who will be accompanying me on this next campaign, with a sailors toque on his head, looks a little like Captain Stan from South Park. Maybe things will get a little more lively, who knows, we’ll have to wait and see.

That bloody harpoon gave my big head a big headache, but like Kenny, I’m back and ready to rock and roll back on down to the Southern Ocean to toss butter bombs and more at those funny but deadly sushi-eating whale killers on the whaling ships.

So folks, stay tuned for Season Three of Whale Wars on Animal Planet and Discovery.