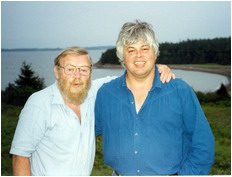 "Well, I don't quite believe it," Mowat quipped Tuesday from his home. "I'd always assumed that Port Hope sort of tolerated my presence, certainly from the official point of view, the council and so on, and as long as I kept quiet they'd let me alone and wouldn't run me out of town on a rail.

I'm not at all sure that this isn't a plot - that it may end up with me being run out on a rail. But if not, I'm going to be very happy," said Mowat, who turns 84 years old on May 12th. "It's always a great pleasure to be celebrated before you're dead."

Farley was born in the Belleville, Ontario, community in 1921 and has lived all across the country. He resides with his wife Claire during the summer on Cape Breton Island.

In an interview with the Canadian Press, Farley said, "I would dearly love to see the massacre of the seals ended. I think it's perhaps the most atrocious single trespass by human beings against the living world that's taking place today. I'm a survivalist. I want life to continue on this planet, and at the rate human beings are destroying it or threatening to destroy it, I think there's some doubt that it will be." 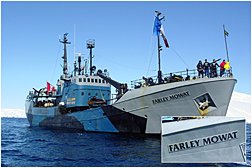 The Canadian Press also reported that the Sea Shepherd Conservation Society has a ship named in his honour.

All this week, Port Hope's library system is showing films based on some of Mowat's best-selling books, among them Lost in the Barrens, The Curse of the Viking Grave, and Never Cry Wolf.

Tonight Farley Mowat will be in the spotlight to receive tributes from several notables, among them environmentalist Elizabeth May of the Sierra Club and singer/satirist Nancy White who will serenade the guest of honour with her "Farley" song.

Margaret Atwood can't attend, but she has asked Anna Porter, retiring publisher of Key Porter Books, to read her foreword to Mowat's book High Latitudes, in which she discusses the importance he has had on Canadian literature.

Captain Paul Watson spoke with Farley last night from the R/V Farley Mowat and told him that he deserved the honour. "Farley is the environmental conscience of Canada. He has done more to promote the idea of conservation in Canada than any other single Canadian in the history of the country. We are honoured to have him as the International Chair of Sea Shepherd Conservation Society." said Captain Watson. "Wherever in the world that the R/V Farley Mowat goes, people visit the ship who have read Farley's books. He has been an inspiration to three generations, and personally, he has been mentor to me."