Captain Alex Cornelissen and 1st Officer Peter Hammarstedt were freed from solitary confinement in Sydney, Nova Scotia in the late afternoon of April 14th, after Captain Paul Watson delivered $10,000 in doubloons to the Nova Scotia courts.

"We do not view the arrests as lawful," said Captain Watson. "These men were seized from their Dutch flagged ship on the high seas in international waters by armed men who then commandeered the ship and the personal property of the crew. This was an act of piracy and we do not recognize this as bail. It's a ransom that we have been forced to pay and since it's a ransom being paid to pirates, it's appropriate that it has been paid in doubloons." 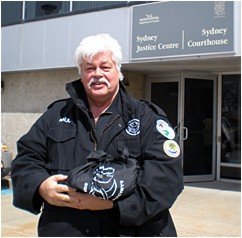 Upon his release from detention, Captain Alex Cornelissen responded to reporters who said that Fisheries Minister Loyola Hearn claims the Farley Mowat was in Canadian waters at the time it was boarded.

"Hearn is an absolute liar. We were 35 miles from land when we were attacked and not once did we ever come close to the 12 mile limit. My ship was taken by armed pirates under the direction of the Federal Minister of Fisheries. I suppose he needed to do something dramatic to distract from the fact that he was responsible for the deaths of four sealers last month," Cornelissen said.

The GPS unit on the Sea Shepherd ship Farley Mowat has a record of the movements of the ship and is evidence that the ship never entered Canadian territorial waters.

The bond to secure the release of the two Sea Shepherd officers was put up by Canadian author and naturalist Farley Mowat.

"I put up the bail and I will confirm now that I will use whatever resources I've got, monetary and otherwise, to defend them," the 86-year-old environmentalist told CBC. "It's a pirate's ransom, and that's just what they are," Mowat said from his home in Port Hope yesterday. "The great genius (Fisheries Minister) Loyola Hearn deliberately goaded the Farley Mowat into doing something so police (RCMP) could come and arrest them."
He added the "blood red bullies" (the Canadian Coast Guard) came up to the Farley Mowatand invited the altercation by ramming the Sea Shepherd ship twice. "It was the Coast Guard who instigated it, not the Farley Mowat," said Mowat.

Cornelissen and 1st Mate Peter Hammarstedt described their treatment by the Canadian authorities as bizarre. Hammarstedt was accused by a Mountie of being a member of Al Qaeda and asked when he was going to carry out the next 9-11 attack. Both Peter and Alex remained quiet and said nothing to the authorities in response to questions.

"Our position was that we were prisoners illegally taken from our ship on the high seas and forced at gunpoint to enter Canada. We did not and will not cooperate with these people. They acted unlawfully," said Hammarstedt. "It was however fascinating to watch the empty headed bureaucratic mind in operation. They brought me before a Canadian immigration officer in hand cuffs and I only had the shirt on my back. The Federal Fisheries officers had taken my money, my passport, and my belongings yet this man asked me with a straight face if I had anything to declare. He asked if I had any firearms on me. He asked if I had any alcohol on me. He asked if I had more than $10,000 in cash on me. He asked how long I intended to stay in Canada. His actions were robotic and the man clearly was incapable of observing the fact that I could not possibly be carrying alcohol, guns or cash. I guess I could have declared the handcuffs but I decided to not say a word which clearly frustrated everyone."

Meanwhile Premier Danny Williams called Captain Paul Watson a "terrorist" on national television. When asked for his response to this Captain Watson stated, "Mr. Williams should then arrest me or shut up."

"I have never been convicted of any felony, I am not on any no-fly lists, I am not barred from entry into any country, I have not ever injured a single person and I have never threatened anyone's life," said Watson. "So just what kind of terrorist does this guy think I am? Williams is just another Nufie politician shooting his mouth off about things he does not understand. I suggest that he opens a dictionary and searches for the definition of words before he uses them."

Hammarstedt has been ordered deported to Sweden and Cornelissen to the Netherlands. Captain Cornelissen intends to meet with representatives of the Dutch government to report an act of piracy against a Dutch vessel. The Sea Shepherd ship Farley Mowat has been seized without any explanation or charges laid against it.

Sea Shepherd International Chair Farley Mowat appeared on National television to defend Sea Shepherd from the attacks by the government.

"A gross miscarriage of justice has been perpetrated by Fisheries Minister Loyola Hearn and any Canadian with any conscience would try to rectify it," he said in an interview from his home in Port Hope, Ontario. "I have some conscience - not much - and a little money - not much - so I'm putting both to use and I'm doing my best to rectify a wrong."

Canadian government officials have resorted to schoolyard name calling in their defense of the sealers. "I consider Watson to be a terrorist," Newfoundland Premier Danny Williams said. Loyola Hearn called seal defenders "a bunch of money-sucking manipulators."

"Ever since I've been aware of him, I've always considered Paul Watson to be, you know, a vile, disgusting excuse for a human being."

Farley Mowat retaliated and called both Williams and Hearn "guttersnipes."

"They're big mouths," he said. "They'll call anybody anything but if someone turns around and calls them what they are, Lord Jesus me son, then the shit hits the fan."

Hearn, bristling at Mowat's comments, remarked on one of the author's better-known books about Newfoundland life, "The Boat Who Wouldn't Float."

"I'd suggest to Mr. Mowat and Mr. Watson this one is not going to float either," Hearn said outside the House of Commons.

The bottom line in this controversy is that Sea Shepherd has struck a nerve. Sea Shepherd is being attacked in the Canadian House of Commons. The story is being covered internationally and the images of the slaughter of the seals are being published worldwide.

"Mr. Hearn's actions have been good for this campaign," said Captain Watson. "Last week I jokingly said that the best publicity we could get is if Canada storms the vessel in international waters but that I did not think that he was that stupid. It appears that I was wrong."

Hearn has appeared hysterical, hilarious and almost frothing at the mouth in anger over Sea Shepherd actions.

"Psychology 101 is sufficient to predict and control Hearn's behaviour," said Watson. "All we need to do is push his buttons and he responds like an angry wind-up doll. It's great."

The latest Hearnism is the Minister comparing himself to Wyatt Earp and comparing Canada to a new Dodge City welcoming us to Canada where he is the new "sheriff."

According to Hearn there ain't room enough in Dodge for Sea Shepherd.

Captain Watson laughed and said, "Anytime, anyplace, face to face, you and I for a debate Loyola. You called me gutless, but do you have the guts to debate me in a public forum. Hell, I'll even let your pal Danny Williams back you up. It will be rhetoric at twenty paces and we can duke it out with verbs, words and blurbs. What do ya say - punk?"
Tweet