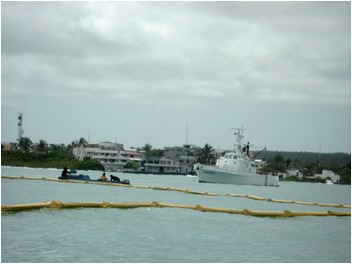 The volunteer crew of the Farley Mowat is working to rescue and clean birds, iguanas, and other marine species impacted by a diesel spill in Academy Bay at Porto Ayora on Santa Cruz Island in the Galapagos.

The spill happened when the tourist dive boat Galapagos Explorer began taking on water late on Wednesday, September 14. The ship sank at around 0100 hours on September 15. The crew and all sixteen passengers escaped unharmed. The ship has three diesel tanks and it is unknown how much fuel has leaked from the wreck.

The crew of the Farley Mowat has been working at helping to clean up the spill for the last five days. The Galapagos National Park has supplied the oil absorbing rags and the Charles Darwin Research Centre has provided bottles to collect water samples. The shore cleaning operations are being coordinated by Farley Mowat Bosun's Mate Kalifi Ferretti-Gallon.

The densest concentration of oil is around the waters near the Red Mangrove hotel.

Sea Shepherd divers recovered about 500-feet of mooring line around the wreck that presented a threat to wildlife. They also recovered floating debris.

An oil boom was deployed around the Galapagos Explorer to contain the spill.

So far, the wildlife loss is minimal and only 10 crabs have been found dead.

UPDATE - 09/23/2005: Last weekend, the ship's owner sent a dive team to secure the valves on the tanks (which stopped the diesel from seeping out) and the tanks have been raised and taken to shore. The rest of the ship is being towed into harbor piece by piece. All that is left are the parts that are lying on the bottom, and they are still working on cleaning those up as well. The oil boom is still around the wreck but there has been no odor of deisel nor any visual siting of oil on shore, so the situation appares to be under control.