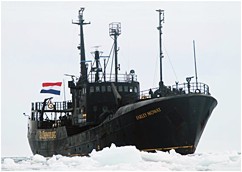 The sealers of the Magdalen Islands are not having a very good year. Four of them have died in a tragic accident when the Coast Guard Icebreaker Sir William Alexander caused the sealing vessel they were towing to capsize.

So far they have killed 3100 seals, far fewer than normal and they are having a difficult time navigating their unsuitable vessels through thick ice and thicker fog. "This is an unusually low number for this time of year," said Phil Jenkins of the Department of Fisheries and Oceans.

The radio patter has sealers sounding disheartened and they are talking about going home and calling it quits for the year, and that translates into good news for the seals. The Newfoundland sealers were scheduled to hit the ice on the 11th of April but they have been set back a day to the 12th of April.

Sea Shepherd does not recognize the Gulf of St. Lawrence in areas beyond the 12 mile limit as Canadian sovereign territory and this is a position backed by the governments of the United States and most European nations. Canada does not own the Gulf of St. Lawrence although they have the right of regulating fishing within the 200 mile limit. They do not have the right to restrict the free passage of a non-Canadian registered yacht through those waters. The Sea Shepherd ship Farley Mowat is not engaged in any economic activity in these waters and if the Canadian government attempts to board the Farley Mowat it will be regarded as an act of war and any crew arrested will be considered as illegally taken as prisoners of war.

The crew of the Farley Mowat have not committed a crime in these waters. They have merely documented the violation of crimes committed by sealers whose cruelty is shocking and horrific. They will continue to monitor and document the slaughter despite Canadian government threats. Information is beginning to surface about the state of Canada's Coast Guard and it is not very pretty.

The Canadian Coast Guard have been so humiliated that they are spending a small fortune hunting for the body of Mr. Carl Aucoin, the sealer who is still missing from the L'Acadien II. The Coast Guard had called off the search last week knowing that finding a body in those ice conditions is 99% impossible. Yet under pressure from the sealers they have dispatched the CCGS Terry Fox, a heavy ice breaker, as well as the CCGS Edward Cornwallis, a light ice breaker to do an intensive and expensive search. At this point in the recovery efforts, the 2,800 square nautical mile search area has been covered more than three times, with resources having covered an area of approximately 9,043 square nautical miles. It has cost millions of dollars and that is another subsidy to the sealers.

Canadian search and rescue efforts are now being dictated by public relations and not by common sense. The man is dead, his body will not be found and that is fact. Spending millions of tax dollars in this fruitless search for a body is illogical and wasteful. But they don't dare stop because the sealers will get offended. They get offended easily and when they assault seal defenders they are given special dispensation to commit violence. When four of their numbers die because they should not have being in the ice in the fragile vessels they were in the first place, they whine that we are being insensitive to their mourning as they continue to bash in the brains of seal pups.

The Sea Shepherd Conservation Society finds it very bizarre that continuing to defend seals in the wake of the tragedy of the sealers dying is insensitive but continuing to bash and slash seal pups as the coffins are lowered into the ground is not considered "insensitive."

Captain Paul Watson said today that, "I am so tired of the moaning and groaning from these sadistic killers about how we are insensitive to their feelings. Hell, from their behaviour on the ice that we have witnessed, I think we can be forgiven for believing they have no feelings - they are simply thugs and like all thugs, once hurt they cry the loudest. The Coast Guard needs to stop being the errand boys for the sealers."

It is the seal hunt that will bring down this institution and the Coat of Arms of the Coast Guard is rapidly being rusted with the blood of the seals. This latest scandal is exposing serious problems within the Coast Guard bureaucracy and this greater scandal is about to erupt very dramatically.

Another bit of really good new for the seals is that seal pelts are fetching only $33 for a pelt - half of what they sold for last year. In 2007 the pelts were going for $62 and in 2006 they sold for $105. This barbaric industry is suffering a serious economic setback. These are encouraging numbers.

Last month the Norwegian Rieber company incinerated 10,000 seal pelts in an effort to lower production to drive up the price. They failed. The price continues to fall. If the European ban on seal products passes as expected, the seal hunt in Canada will be dead. The EU's environment commissioner, Stavros Dimas, is considering a ban amid mounting pressure from animal rights groups. He's expected to make a recommendation before summer.

On top of falling pelt prices, fuel costs have soared. Many Newfoundland sealers are not going to the ice this season because it makes little economic sense and some don't feel they can depend on the Coast Guard for protection. In short it has been a bad year for sealers and it is shaping up as a great year for seals.