Sea Shepherd Conservation Society's ship, the Farley Mowat, was attacked this morning by a mob of 30-40 angry fishermen. The attack took place while berthed in the French islands of St. Pierre and Miquelon. The Farley Mowat was berthed in St. Pierre to transfer video footage of the Canadian seal slaughter onto shore and await the resumption of the slaughter, which was temporarily suspended after the death of four sealers.

Tensions quickly escalated in St. Pierre as the growing mob hurled rocks, threats, and insults at crew members of the Farley Mowat. Cameraman Simeon Houtman was assaulted by an axe-wielding fisherman after stepping onshore to film the incident. "The fisherman raised the axe above his head with one arm and tried to knock Simeon back with his other. Simeon jumped back onto the ship just before the mob threw our gangplank into the water," said Peter Hammarstedt, First Officer of the Farley Mowat.

Captain Alex Cornelissen requested assistance from the French police--at least half a dozen of whom were present at the scene--but they did nothing to defend the ship or crew against the mob. Instead, the police suggested that Sea Shepherd should leave St. Pierre immediately.

Captain Cornelissen explained to the police that it would take some time to warm the engines in order to leave port safely and avoid serious engine damage. He requested protection during that time, but the police did nothing other than stand by and watch as fishermen hacked at the mooring lines of the Farley Mowat with an axe and ripped the gangplank from the ship, setting it dangerously adrift into the harbor.

After the mob severed head and bow-spring lines from the bollards, Sea Shepherd crew members scurried to pull in lines and prevent them from drifting back towards the screw or into the bowthruster. "The mob responded with a rain of stones and rocks that were thrown with the intent to injure," said Hammarstedt.

Without engine power, the Farley Mowat drifted uncontrollably in serious danger of crashing into nearby rocks and/or ships in the harbor. Captain Cornelissen had no choice but to start the engines cold--risking irreparable damage--in order to avoid a potentially lethal collision.

Although the Farley Mowat was able to escape the hostile crowd at St. Pierre, the extent of engine damage sustained remains undetermined. Fortunately, all crew members were on board during the attack, and no-one was injured. 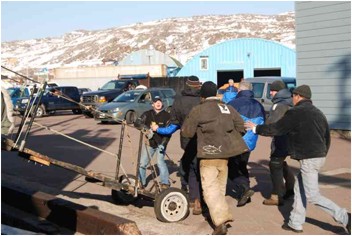 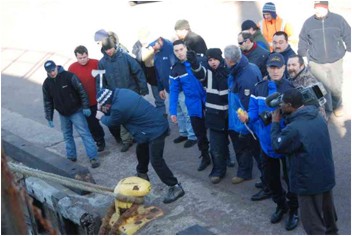 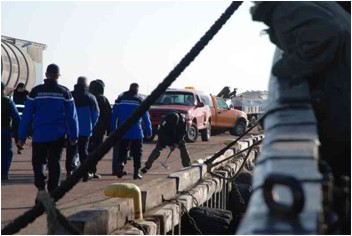 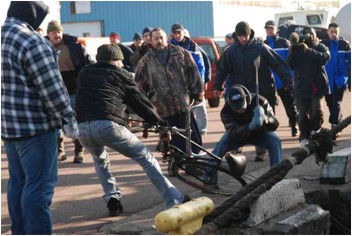 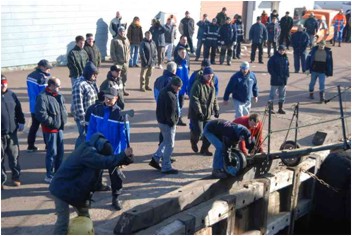 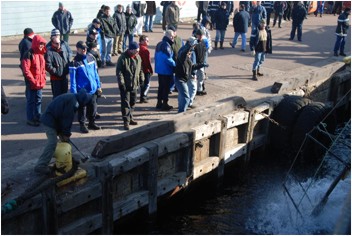