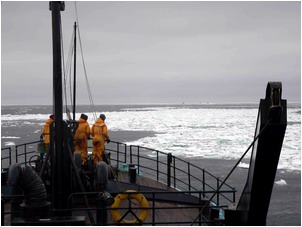 Report from the Farley Mowat
By Captain Watson

Three sealing vessels were on the edge of the floes when the Farley Mowat approached. They were the Labrador Sea, the Labrador Challenger II, and the Beccalina Mist, all out of Labrador. Apparently, many of the vessels have gone into the port of St. Anthony as a severe gale is expected this evening.

As a result of this gale, the seal slaughter has been postponed and will not open tomorrow morning.

The crew of the Farley Mowat will ride out the storm at sea and will be standing by to await word on the opening of the obscenity that the Canadian government describes as a seal hunt.

The Canadian Coast Guard vessel Henry Larsen has closed in enough so that we could identify her. The ship had been following us since yesterday so the Farley Mowat now has her own personal escort. In a radio exchange, the Henry Larsen informed the sealers that they were in the area to monitor the Farley Mowat.

The sealers attempted to intimidate the crew of the Farley Mowat by exchanging comments like, "If we can't kill seals tomorrow we may gets to kill some c**ks**king tree huggers."

"It was the kind of ignorant statement we have come to expect from these seal baby-killing barbarians," said Captain Paul Watson, "so we are not surprised."

The winds are increasing and the crew of the Farley Mowat are hoping that a severe blow will wreak havoc on the plans of the seal killers just as it did in the Gulf of St. Lawrence during the last week of March.

The final figures from the Gulf of St. Lawrence seal massacre report that the sealers slew 34,000 seals or 56,000 under their allotted quota of 90,000. The 56,000 figure has been added to the Newfoundland Front quota for a total allowable kill of 285,000 baby seals.

Severe weather prevented the full take in the Gulf and the severe weather may yet prove to be a salvation for the seals on the Front.

Last year, the killers exceeded their kill quota and slaughtered 365,971 seals in total.

The Farley Mowat is now stopped for the night in the ice awaiting the winds and monitoring the situation in anticipation of the government announcement that will open the carnage on the ice.