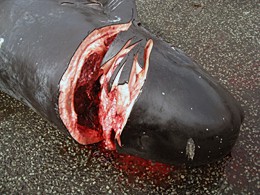 “One whale had five to six brutal chops to her head,” reported Hammarstedt. “The islanders basically used her as a chopping board. Her death would have been slow and extremely painful. Some whales are hacked repeatedly for up to four minutes before they finally die.”

It was equally apparent that the grind is indiscriminate and ruthless.

“Babies had been cut out of their mother’s dead bodies and left to rot on the docks,” said Hammarstedt, who photographed a number of dead infants and fetuses. “Pilot whale groups are strongly matriarchal; I can’t imagine the fear and panic that these mothers must have felt as their families were wiped out in front of them.”

The Faeroese pilot whale grind is similar to the annual Taiji dolphin slaughter in Japan, documented in the award-winning film The Cove. The main difference is that there are at least eighteen different coves in the Faeroes where a grind could potentially take place, as opposed to one cove in Taiji, making it all the more difficult to anticipate where the killings will occur or to get there in time to intervene and prevent the murders. 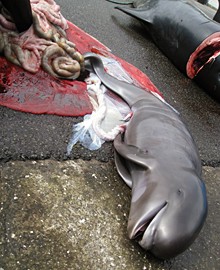 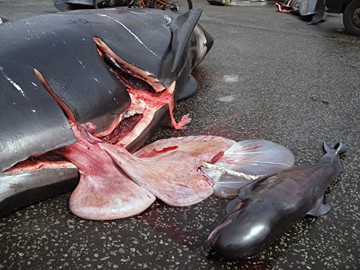 Pilot whales are classified as “strictly protected” under the Convention on the Conservation of European Wildlife and Natural Habitats. By allowing the slaughter to continue in the Faeroes, Denmark fails to abide by its obligations as a signatory of the Convention.

In order to gain access to the grind, Hammarstedt had been posing as a Swedish film student. Even though considerable steps had been taken to conceal his identity, he was ultimately recognized by several hunters due to his role in the Animal Planet TV series Whale Wars. Apparently, even the Faeroese have heard of Sea Shepherd’s interventions against illegal whaling in the Antarctic.

When the whale killers began to follow Hammarstedt by foot at a distance, he quickly escaped to his car where he fled the scene and uploaded images and footage to get them safely out of the country. With his identity compromised, he began receiving threatening messages within the hour and was instructed by Sea Shepherd HQ to exit the country immediately.

Despite heightened scrutiny and police interrogation at the airport, Hammarstedt has confirmed that he has departed the Faeroe Islands.

Sea Shepherd has been actively opposing and confronting the Faeroese grind since 1985 and remains one of the foremost advocates for the whales. 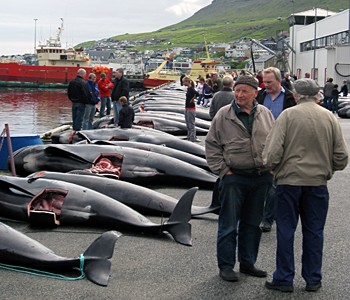 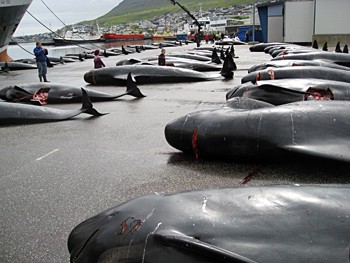