According to Jonsson, “When I arrived, I noticed that several pregnant females had been killed, but their babies were nowhere to be seen. The fetuses had all been moved into either big plastic containers or black garbage bags. I realized that they were hiding them from any prying eyes. I was still able to count at least four dead babies.”

In Klaksvik, Sea Shepherd was able to document several cases where fetuses had been cut directly out of their mothers’ wombs, left to rot on the docks while still attached to the umbilical cord. The images received worldwide attention.

“There was a forklift on the docks that arranged the pilot whales in neat rows,” said Jonsson. “As the whalers were cutting up one of the female pilot whales, they realized that she was pregnant. The whalers asked the forklift driver to turn the cetacean around so that they could cut the fetus out without being seen by the public.” 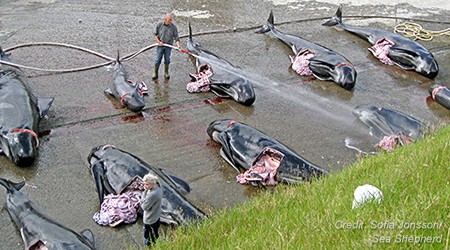 In addition to images that show the indiscriminate nature of the grind, Jonsson was also able to document that several whales had multiple wounds to the head, showing that their deaths were far from painless; and she was able to photograph disturbing images of children partaking in the grind.

Jonsson stated, “I saw children helping their parents cut the whales up. I saw children sitting on whales; their idea of play was to make carvings in the blubber of the dead pilot whales. In the Faeroes, slaughtering cetaceans is definitely a family affair.”

The grind in Leynar took place before the discovery of the Sea Shepherd vessel Golfo Azzuro by Faeroese authorities. Since then, no pilot whales have been killed in the Faeroe Islands. Sea Shepherd is using noise deterrents to keep the pilot whales away from the Ferocious Islands. 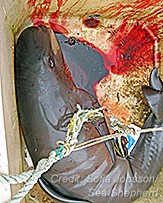 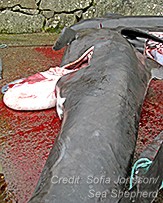