Exotic Control Program in the Galapagos

But the people living in the Galapagos, many of whom are illegal themselves, keep bringing in more dogs and cats. Dogs and cats are not only being smuggled onto the islands but many people are breeding pure breds because of the demand for these animals.

What a tragedy it will be if we lose the marine and land iguanas, the giant tortoise and so many rare and unique bird species to be replaced by islands populated by people, cats, dogs, turtles, cows, and goats.
Cat predation on native birds and little lava lizards has increased greatly and hundreds of iguanas have been killed by roaming dogs. Galapagos seals and sea lions are being attacked and harassed and no more do herons and boobies sun themselves on the main streets of the towns.

At the last CIMEI meeting, the CIMEI coordinator informed the committee that the Galapagos needs an organization to take the dogs and cats away from the islands. This was an idea that Captain Paul Watson expressed to Ecuadorian Vice President Lenin Moreno Garces in a meeting in the Vice President's office in July of 2007.

Her group is the Society (to) Prevent Exotic Contamination (of) Island Eco-Systems (and) Endangered Species or S.P.E.C.I.E.E.S (www.speciees.org).

There is a need to act on this threat.

A combination of illegal fishing, loosely regulated eco-tourism, and the introduction and proliferation of exotic species will destroy the Galapagos Eco-system within a few decades.

SPECIEES believes in non-lethal removal and is looking at a plan to remove dogs and cats from the islands and to find them new homes on the mainland.

It's an ambitious plan but if we are going to save the unique eco-system of the Galapagos we need to find a way to make this plan work.

The Sea Shepherd Conservation Society is partners with CIMEI and Animal Balance and will now partner with SPECIEES to address the serious issue of the impact of exotic species on the Enchanted Isles.

The Sea Shepherd Conservation Society has been stationed in the Galapagos since December of 2000 in our on-going effort to protect and defend the World Heritage Site of the Galapagos from illegal exploitation. The Society is dedicated to upholding international conservation law and especially the Special Law for the Galapagos. The Society works in partnership with the Galapagos National Park rangers, the Ecuadorian National Police and with other NGO's on conservation programs ranging from cleaning up oil spills to intervening against illegal poaching activities.

In 2007, the President of Ecuador awarded Captain Paul Watson with the Amazon Peace Prize for Sea Shepherd's efforts to protect endangered species and habitats in the Galapagos Islands.

The Sea Shepherd campaign in the Galapagos is being spear-headed by Captain Alex Cornelissen, our director for operations in this world heritage site. 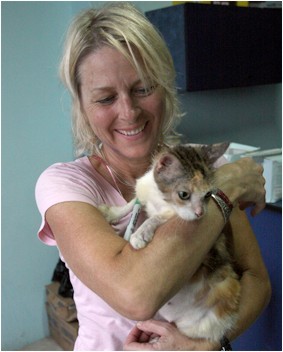 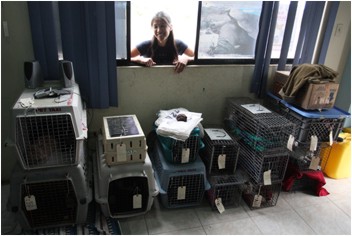 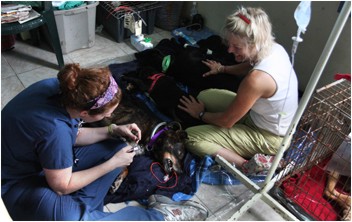 Allison Lance and volunteer Adrian Zap in the recovery area of the Santa Cruz
clinic giving fluids to one dog, monitoring a tracheal breathing tube
on another recovering dog, clipping the nails of the trach tube dog, and the
two other dogs who just had catheters removed.