Europeans To Rule on Seal Product Ban this Month

Europeans To Rule on Seal Product Ban this Month

The lives of millions of seals around the world are now in the hands of the European Parliament. A bill to ban products made from the inhumane slaughter of seals will be put to a vote of the 27 member nations of the European community between July 16th and July 23rd.

Inhumane killing will apply to all seals that are slaughtered by clubs and will affect the market for seal products from Canada and Namibia especially. European Environment Commissioner Stavros Dimas has confirmed that inhumane killing will be applied to death by clubbing.

Mr. Dimas was near Paris yesterday for an informal meeting with European environment ministers. They agreed that the proposed ban would be presented to the European Commission, the executive branch of the EU, on either July 16 or 23. The 27 member countries will then decide collectively whether to approve or reject the ban.

Mr. Dimas appeared confident it will pass. "We have strong support from the French presidency," he told the wire service Agence France-Presse.

"When you club (seals) them it is probably the most effective way to do it," said Jim Winter, a founder of the Canadian Sealers Association. "It's a huge hypocrisy."

"Gas chambers were the most effective way of killing Jews," said Captain Paul Watson. "Effectiveness is a NAZI like justification for cruelty. The slaughter of seals has no place in the 21st Century and Jim Winter is simply a paid public relations whore who would justify the slaughter of human babies if he were paid to do so."

The sealers are hoping that demand for fur in Russia and Asia will negate the impact of the loss of markets to the European Union countries. However Europe will not allow transhipment of seal products to other markets and it is a fact that Europe dictates fashion trends internationally and what is out in fashion in Europe will be out in Russia and Asia also.

"Now is the time to take this issue on," said Gerry Byrne, Liberal MP for the Newfoundland riding of Humber-St. Barbe-Baie Verte. "We'll wait till Paul McCartney and gang move on to something else, some other issue of the day, and we'll continue the seal hunt. As we have for generations and generations."

"Byrne is dreaming if he thinks the world will ignore the agony and screams of the seals," said Captain Paul Watson. "I have devoted my life to protecting seals and I have been there for them for the last thirty years and I will be there for them until the end of my life and I can assure Mr Byrne that Paul McCartney, Brigitte Bardot, Martin Sheen and other celebrities that have voiced their opposition to the annual Canadian seal massacre will always be there to continue to oppose it. You don't sweep cruelty under the rug. Join the 21st century Mr. Byrne, it's time for your small minority of seal killing thugs to get off the government dole and learn a respectable trade - one that does not involve cruelty and the waste of tax-payer dollars to subsidize a tradition that most Canadians are rightfully ashamed of."

Sea Shepherd is looking forward to the European Parliament passing this bill.

"The day that the European Parliament passes this bill will be a milestone in the movement to protect and conserve seal populations around the world, it will be a giant leap forward in the evolution of human kindness and it will reflect the years of hard work, sacrifice and hardships endured by so many around the world to bring this horrifically cruel industry to an end. The sealing industry must be tossed upon the trash heap of history and the word sealer forever equated with inhumanity and savagery," said Captain Watson. 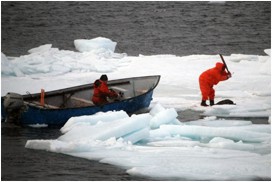 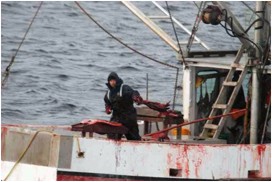 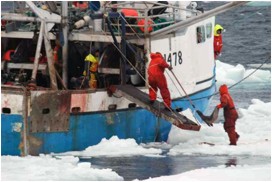