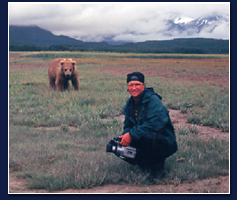 In a world of more than six billion humans beings, there are relatively few who know what it is to be truly alive. All people die but few really live. My friend Timothy Treadwell was one of the few who did live. He discovered his reason for living in Alaska amongst the bears. For thirteen years he did what no other human being had ever done - he walked amongst the great bears, listened to them and spoke to them. He walked through the wilderness without a gun, armed with courage, a vision, and a camera.

In so doing he walked into another dimension and saw things from a singularly unique perspective. Timothy was a man driven by limited time and unquenchable passion. He was in love with the natural world with as much passion as others have for family or lovers.

I saw him on the ice with baby seals and the adoration in his eyes for the harp seal pups radiated. I understood him and I respected him immensely. I have known many people who casually say they would give their life to defend the earth but I have known very few who actually would do so without hesitation.

Timothy was one of those few. He lived his life like every day was his last because he knew the risks he was taking. He suffered no illusions about just how dangerous his chosen purpose was.

Keep in mind. In 1989, the bears in Alaska saved his life. He would have otherwise have perished in the hell of human addiction. Drugs had been for him a release from the pain of bearing witness to the steady diminishment of our natural world. He told me that he went to Alaska to die and his first sight of a Grizzly renewed his will to live and presented him with an opportunity and a mission.

That great golden bear on the California flag haunted him. The very symbol of the State had been exterminated. For those of us who understand, we know the pain of the loss of diversity - we intimately feel the diminishment. Thirteen years later a bear took Timothy's life. He always knew it would be a bear or a poacher. What the bears had given him; a bear took back from him. Timothy may well be the only human being who would have felt empathy for any bear that took his life.

He died in the wilderness with the woman he loved. Amie Huguenard was also under no illusion of the dangers. She had found her place in the great mystery alongside a unique man with profoundly unique qualities.

It was their right as human beings to decide what course to chart with their lives and what contributions and sacrifices to make. They were masters of their own fates and captains of their own souls. And for those who respond to this tragedy with criticism, I find it odd that they see what they want to see. Their criticism of Tim's methods as the cause of his and Amie's death is bogus.

Not once in 13 years was Tim attacked for approaching and talking with bears. He died when a bear stumbled into his camp. A surprised bear is a dangerous bear and not quick to sniff for identification. These things happen. The wilderness is an unforgiving place. What happened to Tim and Amie could have happened to anyone and it has and it will again.

The wilderness is not a place for cowards and the faint of heart. Tim and Amie both knew that and I know that they knew this because I spoke with Tim many times about it. He told me that he expected to die in the place that he loved. His greatest fear of a bear attack was that the bear would be executed for having the arrogance to kill a human being. Tim did not want any of his beloved bears to suffer for his death and Tim would have been the first to say that the deaths of the two bears resulting from his own death would be the greater tragedy for him.

Tim and Amie leave many who will remember and love them. Tim was a member of the Sea Shepherd Advisory Board. He will now be enlisted in our Memorial Board of Advisors along with Edward Abbey, Buckminister Fuller, Margaret Mead, and Cleveland Amory.

And for those who insensitively exploited Tim's death to condemn his methods and his work, I can only refer them to the words of former U.S. President and Grizzly bear admirer Teddy Roosevelt who said: "It is not the critic who counts, not the one who points out how the strong man stumbled or how the doer of deeds might have done better. The credit belongs to the man who is actually in the arena, whose face is marred with sweat and dust and blood; who strives valiantly; who errs and comes short again and again; who knows the great enthusiasms, the great devotions, and spends himself in a worthy cause; who, if he wins, knows the triumph of high achievement; and who, if he fails, at least fails while daring greatly, so that his place shall never be with those cold and timid souls who know neither victory or defeat."