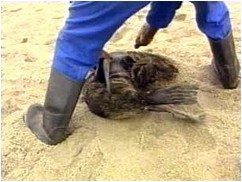 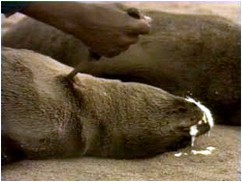 Struggling to free itself, this sealer plunges the knife into the chest of this
7th month old baby seal, its mothers milk pours out ..

Since the 14th Century, the slaughter of these baby Cape fur seals still nursing on mothers milk has continued year after year. The current Namibian seal slaughter of 60,000 baby seals and 7,000 bulls is the second largest seal harvest in the world. An intensive investigation by Seal Alert-SA over the past several years has pieced together a number of issues, that with you help, TODAY - could help end this slaughter finally.

Sealing used to be conducted exclusively on islands, but as the seal numbers became depleted from sealing by 1900, seals fled to the desert mainland in northern South Africa and Namibia. From 1940, sealing activity moved to the mainland because it was easier to round up and club these baby seals to death. Within 30 years, mainland colonies were growing after sealing at over 400%. The reason for this is that because females were exempt, as no market existed and mostly the larger male pups were taken in the harvest, creating an unnatural increased female breeding population. This human-induced population imbalance was turned against the seals and the harvests turned to purely culling exercises to reduce the population that humans continued to cause through sealing.

In 1972, the US enacted the US Marine Mammal Protection Act in which it banned the taking of seal pups still nursing. 60% of the pups were born on farms belonging to De Beers Diamond mining company. South Africa, which was exporting all its skins at the time to the US, became the only country in the world to challenge this act. In 1977, the US Appeal Court upheld the banning of Cape fur seal imports. This should have ended the sealing industry in southern Africa. Instead it was not until 1990, that South Africa ended sealing.

In 1990, Namibia also became independent, and by this stage 75% of the seal pups were being born on the mainland. Once again 60% of these pups were being born in the diamond restricted area, known as the sperrgebiet, controlled by De Beers. Sealing in Namibia is undertaken by only two concession holders on two mainland colonies where 75% of the seal pup population is born. Less than 160 part-time unskilled migrant workers are employed for a few months. For the year 2000, the income from 42,000 pups killed was just $85,000 or less than $3 a seal. The sealing quota is divided between these two concession holders, one at Cape Cross (a nature reserve) and the other Wolf/Atlas Bay (diamond restricted area). Since 1990, the seals in these colonies have experienced two mass die-off's from starvation, due to overfishing, where one third to one half of the population starved to death.

In 2000, when Namibia doubled its sealing quota to 60,000 baby seal pups, after the harvest, it announced that 300,000 seals had starved to death in this same year. As the sealers have only been able to harvest less than 50% of the quota, Namibia lengthened the sealing season to July the 1st. This meant even younger seal babies could be stabbed and clubbed to death.

What You Can Do to Help End This

Unlike the Canadian seal hunt, there is absolutely no press coverage on this subject, however, I have managed to get a wildlife program called 50/50 on South Africa's SABC 3, to do a program on the seals. We need to put certain organizations on television so that millions of South Africans can hear their replies to certain questions.

60% of the seals to be killed are situated within the diamond restricted area of Namibia, known as the sperrgebiet. De Beers denies that they are involved in "culling" seals or that the land belongs to them. More importantly, they refuse to publicly denounce the clubbing of nursing seal pups within the diamond restricted area. Professor Patti Wickens the environmental manager for De Beers refuses to be interviewed for this program. Write to them and demand a public statement on their position on seal clubbing in Namibia:

De Beers also says that we must take this up with the Minister of Fisheries, so write to both the South African and Namibian officials involved, and demand that as this is one population of seals, and as South Africa ended their seal harvest in 1990, Namibia should do so as well. Demand to be told why still nursing baby seal pups are allowed to be killed when the population has already suffered two mass die-off's from starvation.

According to Dr Van Zyl of the Namibian Fisheries, the Minister of Namibia offered the International Fund for Animal Welfare (IFAW) and opportunity to "buy-out" the two sealers in Namibia and end the seal harvest. IFAW rejected this offer. I have written to the Oppenheimer family which controls De Beers to seek their assistance to re-open this offer with Namibia. The filmmakers have requested Jason Bell of IFAW to comment on this "buy-out" offer on camera, to date IFAW has refused. Please write to Dr Van Zyl,  bvanzyl@mfmr.gov.na and Jason Bell, jbell@ifaw.org and request details of this offer be made public, so that we the seal supporters can decide. Write to as well, the Minister, aiyambo@mfmr.gov.na and Dr Little WWF-SA, rlittle@wwfsa.org.za and De Beers Public relations, Suzette Plantema suzette.Plantema@mhs7.tns.co.za and the De Beers country manager in Namibia, Daniel Kali,  Daniel.Kali@debeersgroup.com. Please write to other IFAW offices in your area for comments on this "buy-out" offer. 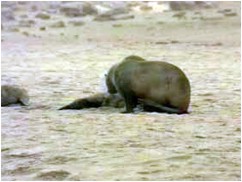 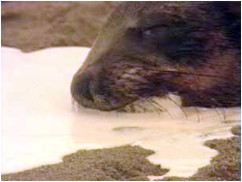 There is some good news. Although the seal slaughter was due to start on 1st July 2006 and although the sealers have their quotas for this season, permission to start the slaughter has been delayed by the Namibian Fisheries Minister, (it might start next week or the week after). At this time, I have no clear reason why this was delayed, perhaps something positive is happening - this is the time to really write and put pen to paper.

Please do so, and together we can end this hunt. Finally, it saddens me that no one has taken up the task of staging a Anti-Seal protest outside the Namibian embassy's, not even here in South Africa. I know we together can end this hunt, if you just do your part - I would not be asking if I did not have full belief in your support.