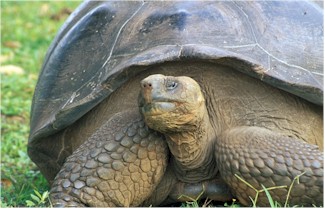 The government of Ecuador has become so weak and incompetent that a small mob of uneducated fishermen are routinely able to threaten a World Heritage Site by utilizing threats and violence.

Once again the fishermen thugs of the Galapagos have bullied the government of Ecuador into giving into their demands.

The Sea Shepherd Conservation Society sent a crew of volunteers to the Park to assist the rangers and to act as bodyguards to the giant tortoise Lonesome George, the last of his sub-species.

The fishermen had threatened to kidnap or kill Lonesome George unless the government gave into their demands.

And once again the government capitulated.

Jared Rubin, Communications officer of the Farley Mowat, anchored in Academy Bay off Santa Cruz Island filed the following report on the events of this past week.

Jared reporting to Captain Paul Watson who is presently in Colorado said that the Farley Mowat's crew was ready and willing to defend the Park alongside the rangers and the marines.

Captain Watson will be returning to the Galapagos next week to work with his crew to prepare for the chaos of the sea cucumber fishery scheduled to open at the beginning of June.

It is evident that the fishermen of the Galapagos consider themselves to be above the law and answerable to no one but themselves.

The sea cucumber population has been drastically diminished yet they are demanding unrestricted exploitation.

When the sea cucumbers have been destroyed the fishermen plan to intimidate the government into allowing the use of longlines to exploit the sharks of the Galapagos.

What is happening in the Galapagos is the systematic willful over-exploitation of the entire marine reserve. This World Heritage site is being raped and pillaged for short- term gain.

The long-term ecological and economic outlook for the Galapagos is looking depressingly bleak.

Unfortunately the political "decision-makers" in Quito are only concerned with being elected for another term and apparently have little concern for the long-term survival of the Galapagos.

The management of marine resources in Ecuador is not guided by science or economics. Instead the management is dictated by mob violence.

What is happening in the Galapagos is an ecological crisis and it is reflective of the greater crisis worldwide . Rising human populations give rise to more demands for resource exploitation leading to all marine resources being overly stressed.

Yet we cannot even stop over-exploitation in a protected national park and World Heritage Site. How can we possibly protect natural resources that don't have even this so called "protection".

The Sea Shepherd Conservation Society is asking that people write, fax, or e-mail the Ecuadorian government through the embassies in their countries and demand that the government stand up to the mob of violent thugs terrorizing the Galapagos.