Ecuador Will Join the International Whaling Commission This Year

Ecuador Will Join the International Whaling Commission This Year

Reliable sources have confirmed to Sea Shepherd Galapagos Director of Operations Sean O'Hearn-Gimenez that Ecuador will be joining the International Whaling Commission (IWC) and will be attending the meeting to be held on May 4th, 2007 in Anchorage, Alaska, thereby demonstrating that the government of the President of the Republic of Ecuador, Economist Rafael Correa, is serious about the conservation of the world's environment.

Sea Shepherd Conservation Society has supported conservation efforts in the Galapagos Islands, a province of Ecuador, since the year 2000 and has been advising the current administration, (through its allied Ecuadorian grassroots organization, Fundación Selva-Vida Sin Fronteras), of the need for Ecuador to join as member of the IWC and to send its delegate to the 59th International meeting of this intergovernmental organization to be held this year. The IWC is responsible for whaling regulations on a global scale, and to date consists of 70 different nations, including Latin American countries such as Argentina, Brazil, Peru and Chile. 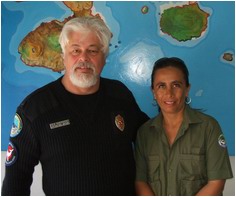 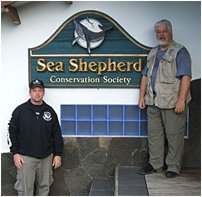 O'Hearn-Giminez commented that, "The significance of Ecuador's presence and vote this year against the threat of commercial whaling could be decisive at this international event, and Sea Shepherd and its allies only interest is that the whales be saved and protected." The Galapagos Islands are included on UNESCO's World Heritage Site list and have been protected as a Marine Biological Reserve but a little known fact is that Ecuador had also declared the Galapagos Islands a Whale Sanctuary in 1990. It is for this reason that Ecuador's decision to be directly involved in this whale conservation issue has profoundly demonstrated to the world that it is taking a lead in protecting marine species, especially those that are in danger of extinction.

Whales are a highly migratory species that follow a migratory route from the Antarctic waters up towards the coasts of Ecuador and Colombia in search of warmer waters in order to reproduce.  In Ecuadorian waters, between 2,000 and 3,000 whales reproduce annually. Despite the fact that strong Ecuadorian laws exist to protect these whales, as they migrate towards other parts of the world, they are in imminent danger of being exterminated due to whaling that is being carried out in contravention to the worldwide ban.

Sea Shepherd points out that whales represent an enormous economic resource due to the whale watching industry on the coasts of Ecuador. In Puerto Lopez, Salinas and Sua (not including the Galapagos Islands) alone, there is an estimated $3 to $7 million dollars of direct and indirect income that can be attributed to 25,000 tourists participating in whale watching each year. In fact, whale watching is the main activity of ecotourism along the Ecuadorian coasts and is helping to revitalize tourism during the summer along the coastline. Therefore, in addition to the whales' importance in the delicate marine ecosystem, they are vital to the economy of this country.

In the Galapagos Islands, Sea Shepherd since the year 2000, has partnered with the Galapagos National Park, a division of the Ministry of Environment for Ecuador. Sea Shepherd has supported patrolling operations through its donation of a retired U.S. Coast Guard cutter named Yoshka (aka Sirenian), which has proved to be indispensable in patrolling operations within the Galapagos Marine Reserve (GMR). In its seven years of operation within the GMR, it has been responsible for the confiscation of over 5,000 shark fins, reduced the threat of pirate industrial fishing fleets, prevented the illegal catch and smuggling of sea cucumbers, as well as the killing of sea lions which often are used as bait for shark hunters and subsequently its sexual organs used for the commercial production of aphrodisiacs in Asian markets.  Currently, from its office in the Galapagos, Sea Shepherd is also working on developing environmental education projects geared towards lifting an environmental awareness among the tourists that visit the archipelago as well as the many local children who are residents of the Galapagos.

Click here to read our Field Reports on our progress in the Galapagos.